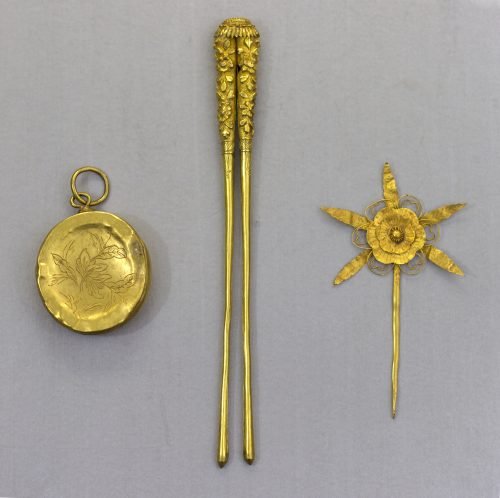 The slightly oval locket is edged with rows of fine bosses on the sides and etched with a peony on a leafy branch on one side and a lily on the reverse. On top is a loop attachment with a loose ring for suspension. The Song hairpin is double tined with hollow pins and is surmounted by a chrysanthemum-like flower above seasonal flowers in repoussé
arranged four on each side with incised, zigzag and pendant triangles. The Liao gold hairpin has a central, double overlapped floret enclosed by a six-petal thin wire flower and five radiating leaves with serrated edges. A thin tapered pin is soldered on the back.

Paintings from the Liao and Song dynasties, contemporaneous with the objects here, are populated by females of rank and wealth expressed in their garb and accoutrement. Hair piled high and held up and embellished with gold hairpins was a commonplace for them, the precious metal having been established as a signifier of wealth a millennia and a half earlier. Exquisite examples of Tang dynasty gold and silver hair embellishments preserved in the mid-8th century repository of imperial treasures in the Shōsōin in Nara, Japan suggests the source for the floral style of the Liao hairpin observed here. Similar double tined hairpins in silver and gold along with a locket suspended from an embroidered sash were part of a trousseau for the afterlife of the young wife of a Song Imperial clansman and discovered in their mid-13th century tomb in Fuzhou in Fujian province.[1] The individual who etched the floral sprays decorating the locket was in step with the Song painters and ceramic decorators whose guiding light was nature.