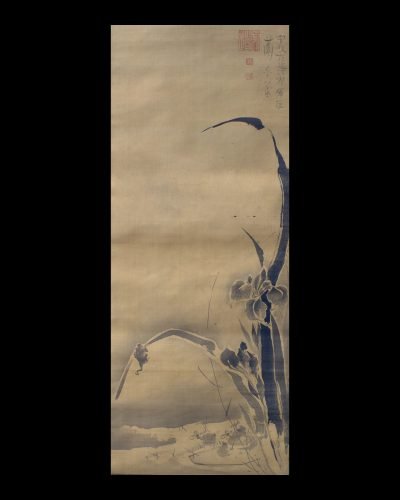 A moment later and the scene here–iris growing from the waters of a still pond, one leaf towards the bottom bent under the weight of a frog clinging to it—could well have changed, that next moment described in a well-known haiku written about a century earlier than the painting by the exalted poet Matsuo Basho: “An ancient pond/a frog jumps in/the splash of water.” This might well have been in the artist’s mind as he brushed his painting, itself poetic and suggestive.

The earthen bank of the still water is skillfully indicated by ink washes while a reserve technique calls attention to the frog and its precarious position. The leaves were executed in ink tones ranging from light to very dark while the blossoms are shaded so as to suggest shadowy color. The stalks and leaves were arranged so as to emphasize the diagonal axis of the painting at the same time directing the eye of the viewer to the artist’s inscription and seals in the upper right. All in all the painting demonstrates superb technique as well as a most original presentation of a simple but engaging subject capturing the essence of summer.

Soga Shiryu, called Shōhaku, was born in Ise city, Mie prefecture but lived in Kyoto, where he first studied under the Kano master Takada Keiho (1674-1755) but soon revealed a very independent and idiosyncratic approach to painting. Working in a style and approach that went far beyond his Kano-school training, Shōhaku is now admired as one of the most creative artists of the Edo period.