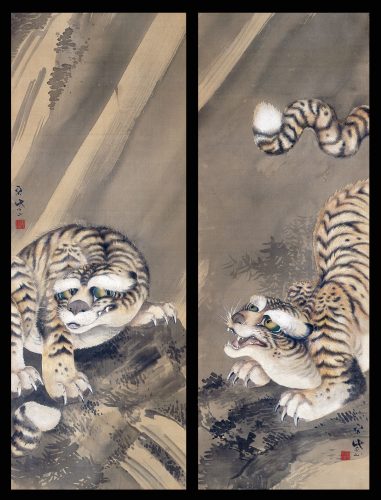 Box inscription:
Written by Yūei in 1828 when he obtained the paintings from the Kanryū-in.

Within dynamic compositions unified by striated streams of water sweeping diagonally across the backgrounds, two tigers are engagingly frolicsome, their teeth bared and claws extended in mock battle. Although the artist clearly intended a naturalistic presentation of his subject, his genius for decorative design manifested itself in the delightful patterns of the tigers’ pelts and the striking color, especially of their eyes. Also noteworthy here is the contrast in style between the tigers and their respective backgrounds, with the former painted in great detail and descriptive color while the latter was done in ink only with minimal detail, an approach which throws due emphasis on the primary subjects of the paintings.

Kusumoto Hakkei, called Sō Shizan and Shizan, was the adopted son of the well-known Edo master Sō Shiseki (1715-1786). Shiseki had gone to Nagasaki around 1755 and studied directly with the Chinese painter Song Ziyan, in Japanese Sō Shigan, from whom Shiseki derived his own name. Using the style imported from China and blending it with stylistic elements derived from European art then being brought into Nagasaki by Dutch traders, Shiseki created a new art free of the strictures of the official Kanō style of painting. His influence was quite far-reaching among Japanese artists, promoted by many pupils, including his son. Sō Shizan’s personal style, on the other hand, evolved into one that might be characterized as light in mood, often playful and with significant decorative impact, as so well demonstrated in the present pair of paintings.