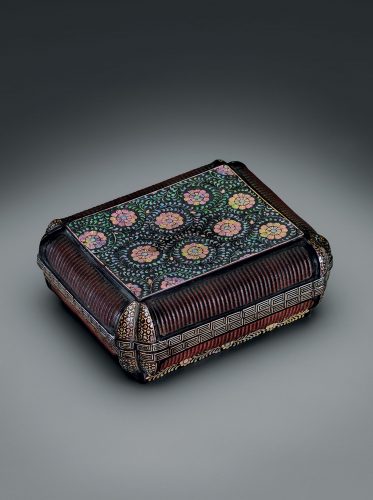 The box is of rectangular shape with canted corners raised on a thin foot. Finely woven reddish-brown basketry forms the curved sides of the bottom and lid with each corner bifurcated and inlaid with mother-of-pearl to form a dense pattern of minute geometric stars. The rims of bottom and lid meet when the box is closed forming a double border of inlaid fret and the foot is decorated with floret and vine motifs. On the lid a graceful pattern of large florets on spiraling leafy vines is inlaid with mother-of-pearl, the comma-shaped leaves reflecting a green color in contrast to the purplish-pink glow of the flower heads, each of which is composed of two circles of petals surrounding a small disk in the center, each petal incised with lines radiating from the disk. Black lacquer covers the base and deep red lacquer with some surface crackle coats the receptacle and lid interior.

This small box with delicate basketwork, refined design, and exquisite workmanship is a fine example of late Ming lacquerware. Such small, delicate pieces are not commonplace. An important example in the Cleveland Museum of Art is square and of approximately the same size as the present (fig. 1). The basketwork panels and use of mother-of-pearl inlay of the two are closely related, although the Cleveland piece is enhanced with gold. The Cleveland box is further inscribed on the base in red lacquer with a date corresponding to A.D. 1609 during the Wanli reign era (A.D. 1573-1619). At that particular time, lacquer wares with basketwork panels incorporated into the structures must have been quite popular items as evinced by a good number of dated examples and comparable pieces.[1] A small box in a private collection with unusual border designs consisting of a cash pattern produced with inlaid mother-of-pearl is ascribed to this period and is also small in size, comparable to the present (fig. 2).

What is most unusual about the present box is the design decorating the rectangular field on the lid. A carefully organized pattern of blossoms floating amidst leafy tendrils that spiral round them is a rarity at a time when and in a medium where figural subjects dominated. Normally this type of floral pattern is relegated to border areas as exemplified in a lozenge-shaped tray and foliate dish illustrated here (figs. 3-5). The display of the flowers across the surface reminds us more of textiles, however, than lacquer compositions. Interestingly, in the earliest era of significant and sophisticated lacquer production in China, during the late Zhou and early Han period, the relationship between the two disciplines, lacquer and textile, was extremely close. That affinity between the two disciplines was likely at work again when the present lacquer box was designed. 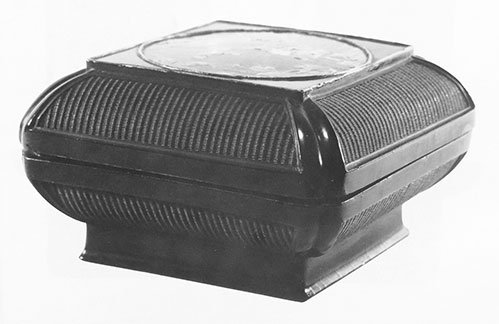 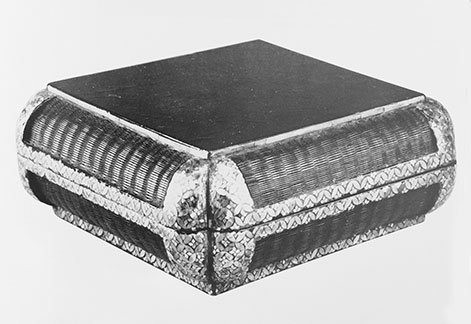 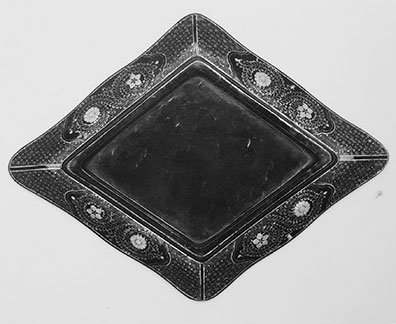 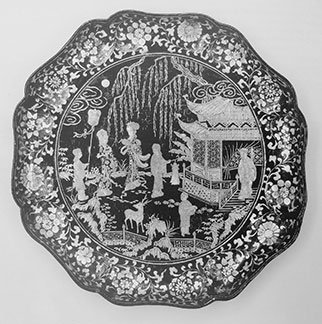 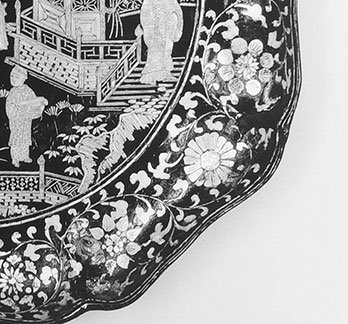 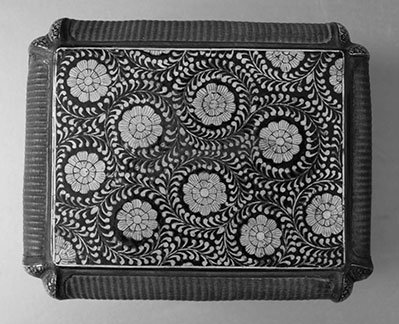