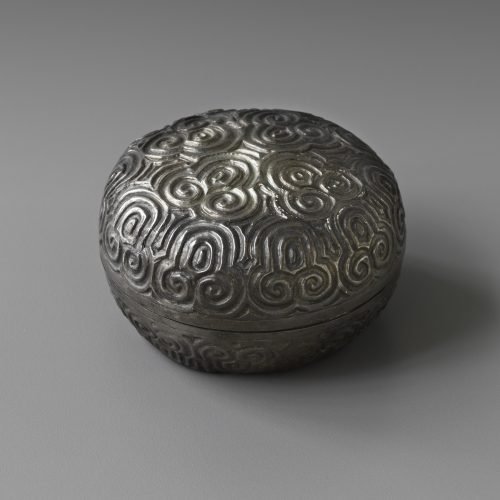 Of cushion shape the light-weight silver box rests on a flat base and was hammered with a bold pattern consisting of ruyi heads, the “wish-granting” motif, a form based on the appearance of fungus or “magic mushrooms” and commonly used as a scepter head. The décor is comprised of a row of ruyi heads surrounding the mouth of the vessel and lining the rim of the close fitting lid, with four further ruyi arranged in quatrefoil form on the top of the lid.

The motif see here is used ubiquitously in Chinese decorative arts. When forming an overall pattern, such as here, it is known by the Japanese term, guri, “whirligig scrolls,” the name associated most particularly with lacquer décor where the pattern was used from at least the Song dynasty onward. A lacquer box from a tomb dated to 1235, a silver box almost identical to the present excavated from a tomb dated to 1272, and a bottle also from a Southern Song tomb (figs. 1 -3) suggest the period of production of the present piece. It is most probable that lacquer was the earliest medium in which the motif was used, and used often, migrating to ceramics and silver thereafter where it is not as commonly found, thus making the present piece not only a charming piece but a rare one as well.