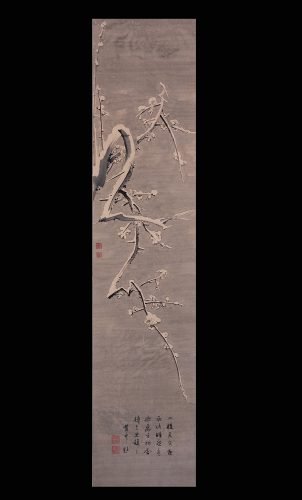 “Branch of Blossoming Plum in Snow”

Seals of the artist:
Shukei no in; Imei

Colophon by Kenjo Daiten (1718-1801):
“A single branch hangs down from who knows where, and contains this very grand color;
Tender buds rest half-opened beside each other, Passing on word so all think fragrance, fragrance.
Inscribed by Shochu.” Shishi Samei; Kanjo Daiten

An angular branch of blossoming plum constitutes the sole object in the painting but the visual effect is nonetheless quite strong and complex. The technique itself is of interest, for the artist first washed in almost the entire background with ink, leaving only the outlines of the branch and the blossoms to be represented by the unpainted white of the paper ground. Darker strokes of ink were then used to structure the forms and to create a rhythmic flow throughout the painting. Arranged mainly on the descending diagonal of the picture, a single branch extends upward in a sharp arc that provides formal contrast to the softer curves of the lower portion. The painted image is complemented perfectly by the poem, written by the literature teacher of the artist, and it is very likely that the artist intended from the beginning for a poem to be placed in this location.

Imei was born in Wakasa province, part of modern Fukui prefecture. Following a period of travel through various districts, Imei began to study literature with Daiten (1718-1801) of the Jiun-in in Shokoku-ji. Imei learned to paint under Ito Jakuchu (1716-1800), who had a close relationship with Shokoku-ji. Studying at a later time the Chinese Ming and Ch’ing paintings held in temple collections, Imei developed his own, very elegant style, concentrating especially on paintings of the blossoming plum, which earned him great fame and many patrons. A number of these were inscribed, as is the present example, with poems by Shochu Daiten, who was also a good friend to and literature teacher of Ike Taiga.