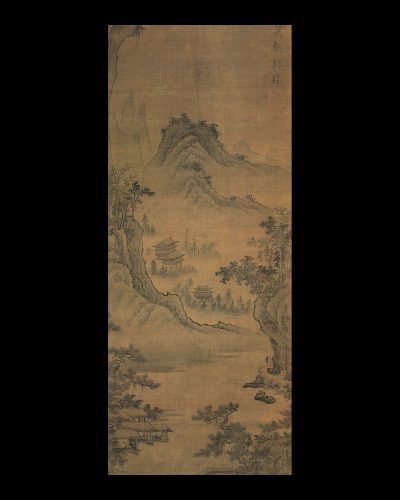 The composition here is quite unusual, bearing out the comment in his biography that “…he often painted landscapes which were extremely evocative.” A consistent recession in depth in the lower part of the picture leads from a waterside village back to a middle area which is viewed as through a frame, the mountain forms arranged so as to block off continued movement in depth. This frame continues upward along the left margin to the very top of the picture, where the mountain peak extends rightward, as might the stage curtain in a theater. The effect is to keep viewers at a distance, presenting us with vignettes of narrative interest that we are not able to approach but must view from afar, appreciating the painting as an aesthetic whole rather than as an accumulation of parts.

Shi Pu, born in Kunshan, Jiangsu province, was a painter and calligrapher who seems to have had little ambition for advancement in the official bureaucracy. Active during the late 15th to early 16th century Shi Pu died at the age of eighty-seven.