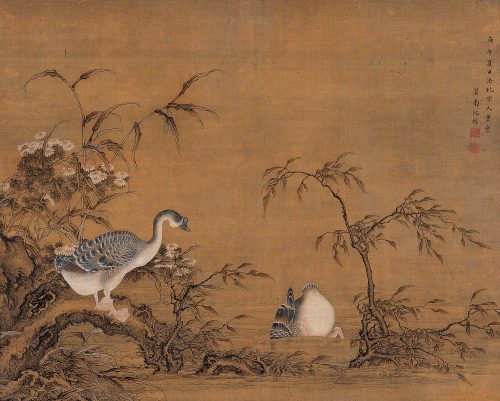 Inscription:
‘On a summer day of the year 1750, I followed the brush conception of a Northern Sung artist. Shen K’ai, called T’iao-nan.’

Two geese are placed within an appropriate environment–the reed-bordered bank from which they can obtain their required nourishment. One goose pauses on the bank, the other dunks in search of food. The composition is based primarily on the pictorial diagonals of the painting, lending a degree of kinetic energy to the scene. Much of the style here can be related to that of the mid-I8th century painter Shen Ch’uan (1682-ca. 1760), whose works offer similar images of the bucolic pleasures of nature.

Although Shen K’ai is not recorded in standard biographical sources, the style of his painting is clearly derived from that of Shen Ch’uan. [For a biography of Shen Ch’uan, see Howard Rogers: Masterworks of Ming and Qing Painting from the Forbidden City, Lansdale, 1988, cat. 59, pp. 186-187.] Given that they have the same surname, it is likely that Shen K’ai was a close relative of the elder master, his son, nephew, or grandson. The character Ch’uan includes the metal radical, while K’ai is written with the wood radical; if these given names follow the sequence of the five elements of wood, fire, earth, metal, and water, the two artists have been may two generations apart. Whatever the exact relationship, it can be concluded that Shen K’ai was a most talented disciple of the earlier master’s style. It should be noted that Shen Ch’uan was still very active in 1750, the date of the present painting, which may indicate that Shen K’ai was a nephew of Shen Ch’uan, the son of an older brother of the master.