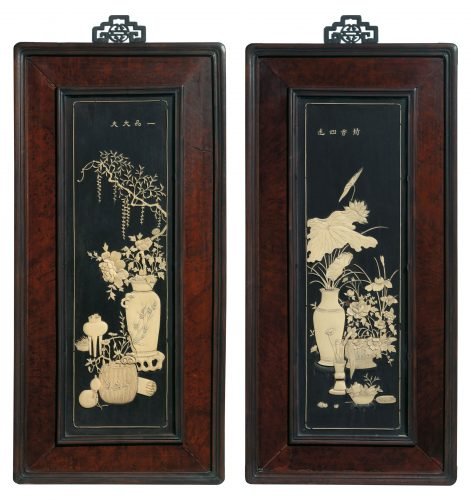 Each rectangular panel of dark purplish wood (yingmu) is inlaid with bone carved in relief depicting a scholarly world replete with implements, objects, and furnishings along with fruit and flowers, each panel inlaid with a four character inscription, the panels framed in burl wood and each fitted at the top with a decorative metal hanger for suspension.

Description of the panels from right to left:

The first panel, inscribed Yipin dafu, ‘First Class High Official,’ is decorated with a scene that conveys late spring with the tall vase supported on a rustic openwork stand displaying a dramatically placed branch of wisteria dangling blossoms along with a huge peony blossom. To the left is a tall tripod ding vessel and in front is basket of lingzhi fungus and flowers, with a gourd to one side along with a packet of roots.

The second panel, inscribed Hexiang siyuan, ‘Fragrance of Lotuses Goes to the Four Directions,’ is decorated with a tall baluster vase containing a giant lotus blossom and several leaves, one impressively large and floppy, producing a sense of summer. A basket of varied blossoms including camellia, a container in the form of an ancient bronze gu wine vessel holding a ruyi ‘wish-granting’ scepter, writing brushes, a small scroll and a fly whisk. A fruit bowl containing pomegranate and finger citron is placed in front with a small fan lying on its side. 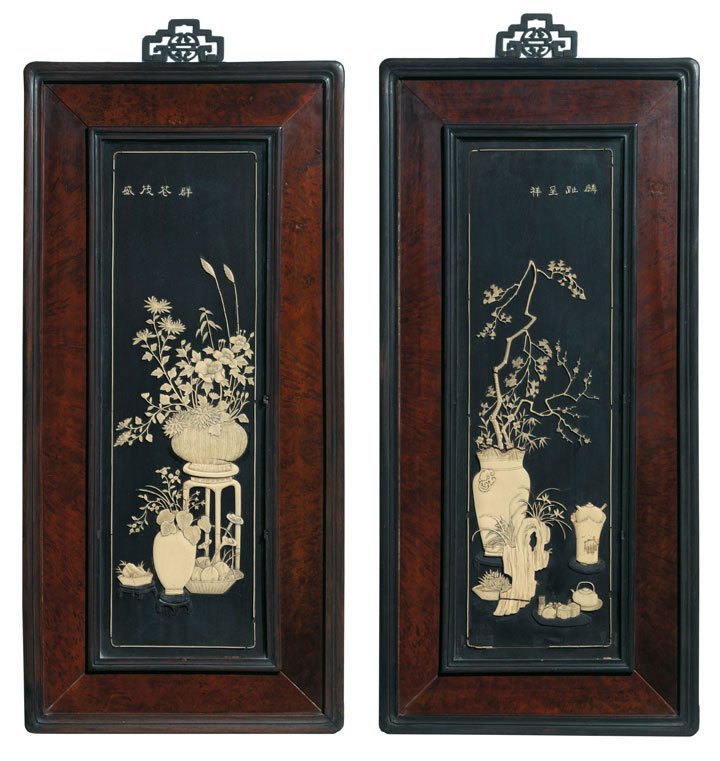 The third panel, inscribed Junhua maosheng, ‘A Bouquet of Flowers Flourishes Exuberantly,’ is dominated by a large basket set on a high four-legged pedestal and holding a rambunctious bouquet of chrysanthemum and grasses, conveying an autumnal season. A handsome egg-shaped vase on a wood stand is filled with small flowers and ivy, with a miniature rock garden in a low ceramic receptacle also supported on a wood stand to the left, and finally a basket of ruyi fungus with pomelo on the ground.

The fourth panel, inscribed Linzhi chengxiang, ‘May the Unicorn’s Hoof Bring You Good Luck,’ is emblematic of winter, the season conveyed by the pine, bamboo and prunus, the hearty ‘Three Friends of Winter’ arranged in a bronze vessel with masked loop handle. A scholar’s rock, where an orchid is rooted, occupies the foreground next to a brazier heating water for tea, in front of a small teapot and an assortment of sweets.

These panels would have graced the interior of an aristocratic mansion bringing delight through their images, easily absorbed in a single glance, the motifs and designs familiar and comforting, but also repaying closer attention through their engaging details. The panels are part of a rather large family of decorative panels for domestic interiors. All manners of materials, including semi-precious stones, enameled copper, wood and bone were fashioned into low relief images for attachment to the wooden panels. The scenes and designs can thus be very colorful and complex because of the diversity of materials or they can be more uniform in material, such as the present works and all attention is thus focused here on the quality of carving, the details of the motifs, and the pictorial compositions.

The decorative and symbolic themes of these panels have counter parts not only in contemporaneous images produced for the enjoyment and edification of the living, for example a set of four paintings of the mid-19th century depicting ‘Ancient Bronzes and Seasonal Flowers’ (fig. 1) but also in images created for the deceased, exemplified here by carvings from an extraordinary tomb, decorated throughout its chambers and hallways with intricately carved stone panels, two of the smaller ones shown here (figs. 2-3) along with a diagram illustrating their placement beneath carved landscape scenes (fig. 4). Such images, including of course those illustrated in the embroidered panel (cat. 71) illustrating symbolic, decorative and functional paraphernalia, reflect the society’s obsession with material diversity and plenty, an obsession which provided countryside and metropolitan craft factories with a booming business. 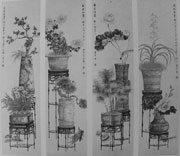 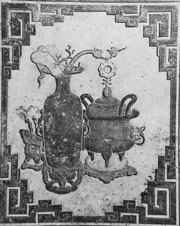 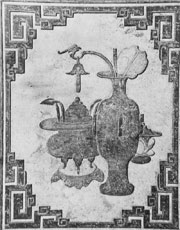 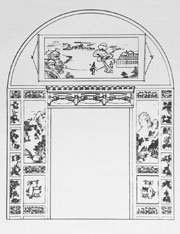