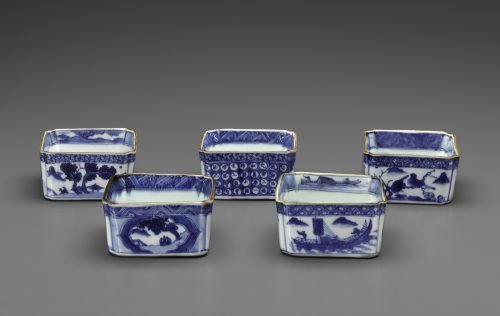 Each small bowl comprising this very rare set is of a slightly irregular square shape, mold produced with canted corners and conforming foot rims. The five are individually decorated on their sides with various combinations of pine and pavilions, pairs of birds on branches, ducks on land, and boats on choppy waters, most set with mountainous terrains in the background, and lengthy calligraphic passages and rows of roundels containing individual characters, as well as both circular and ogival-arch forms enclosing boats, pinwheel designs and a tiny horse-and-rider motif. Immediately below the brown-edged lip rims on the exteriors are narrow borders comprised of either multiple-floret, wan diaper patterns, or complex wavy bands and on the interior with pictorial subjects and geometric designs compressed into horizontal bands below the lip rims. The intense blue color of the décor shows through the clear, bright, transparent glazes while unglazed bases expose the fine white bodies.

The motifs described comprise an encyclopedia of designs appearing on late Ming, underglaze-blue decorated ware made for the Japanese and called Shonzui after a name in inscriptions that occur on some of the pieces.[2] The thick sturdy bodies, brilliant blue color, and the stable bright glazes with mouth rims treated with an iron brown pigment, along with the density and boldness of the décor, are essential features of Shonzui’s artistic and technical world. The production of Shonzui was a response to a new aesthetic among Japan’s tea ceremony masters as the mid-17th century approached, aesthetes who came to desire porcelains of greater sophistication, refinement and technical merit than offered by kosometsuke. While the Tianqi (1621-1628) reign claims kososmetuske, as its own, Shonzui is given to the Chongzhen reign era (1628-1644), even as there are no firm temporal boundaries known for either ware.

One especially noteworthy feature of the Shonzui family decorative compositions is the incorporation of either individual characters or longer inscriptions. In general, the written word has nothing to do with the types of vessels so inscribed nor specifically with the Japanese clients. For example, the inscriptions on the present set of vessels, designed as receptacles for food, are comprised of poetic phrases extoling the virtues of wine and alluding to local Chinese brands. These are strung together in lengthy continuous passages and repeated in the roundels covering the side of one of the bowls. The same inscription appears on an example of Shonzui in the Yamato Bunkakan in Kyoto that happens to be a tea bowl, and, reportedly, on other Shonzui vessels as well. Destined for use by the elite of the tea world in Japan, the literary bent of the decoration must have been of special appeal to the intellects of the tea world in Japan for whom the porcelains were intended.

This set of Shonzui mukōzuke was sold at auction in Tokyo in 1927 when the Hotta family collection came on the block at the Tokyo Bijutsu Club, the venue for numerous auctions during the first decades of the 20th century, at a time when members of the Japanese nobility fell on hard times due to changing economic norms and conditions surrounding international strife. A number of related square-shaped Shonzui mukōzuke, either in sets or as singles were similarly sold, either in Tokyo or at its sister art clubs in Kyoto and Osaka at this time but are somehow rarely seen in current collections or publications available to the public today.

Quite unusual about these present square-form mukōzuke are the canted, or indented, corners, extending from the mouth to the foot rims. The use of this feature in Ming-dynasty ceramics, where it was in fact a rarity, was likely influenced by lacquer work where its use was more common. The rather exceptional shapes of the small vessels, however, along with their bright, bold, dynamic décor, bring to mind ceramics produced in Momoyama (1573-1615)/Edo (1615-1868) period Japan associated with and named after Furuta Oribe (1544-1615), tea master to Ieyasu Tokugawa. In contrast to hardcore kosometsuke that was a response to a Japanese adulation for the natural, unstudied, and imperfect, Furuto Oribe’s taste for the bold and robust, dashing and intense, informed the wares named after him that came into vogue well after his death and the Shonzui wares of China as well. The angular, shapes of Oribe and related wares from nearby Mino kilns, ranging from perfect squares to triangles to inventive geometric shapes, and including, in some cases, canted corners, for example noted in a set of five deep mukōzuke and a larger dish in the Metropolitan Museum appear to have had an instrumental role in the development of Shonzui.[3]