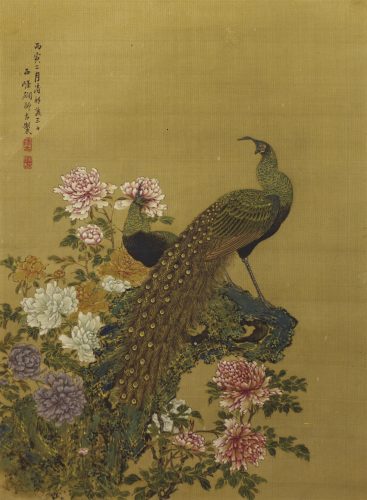 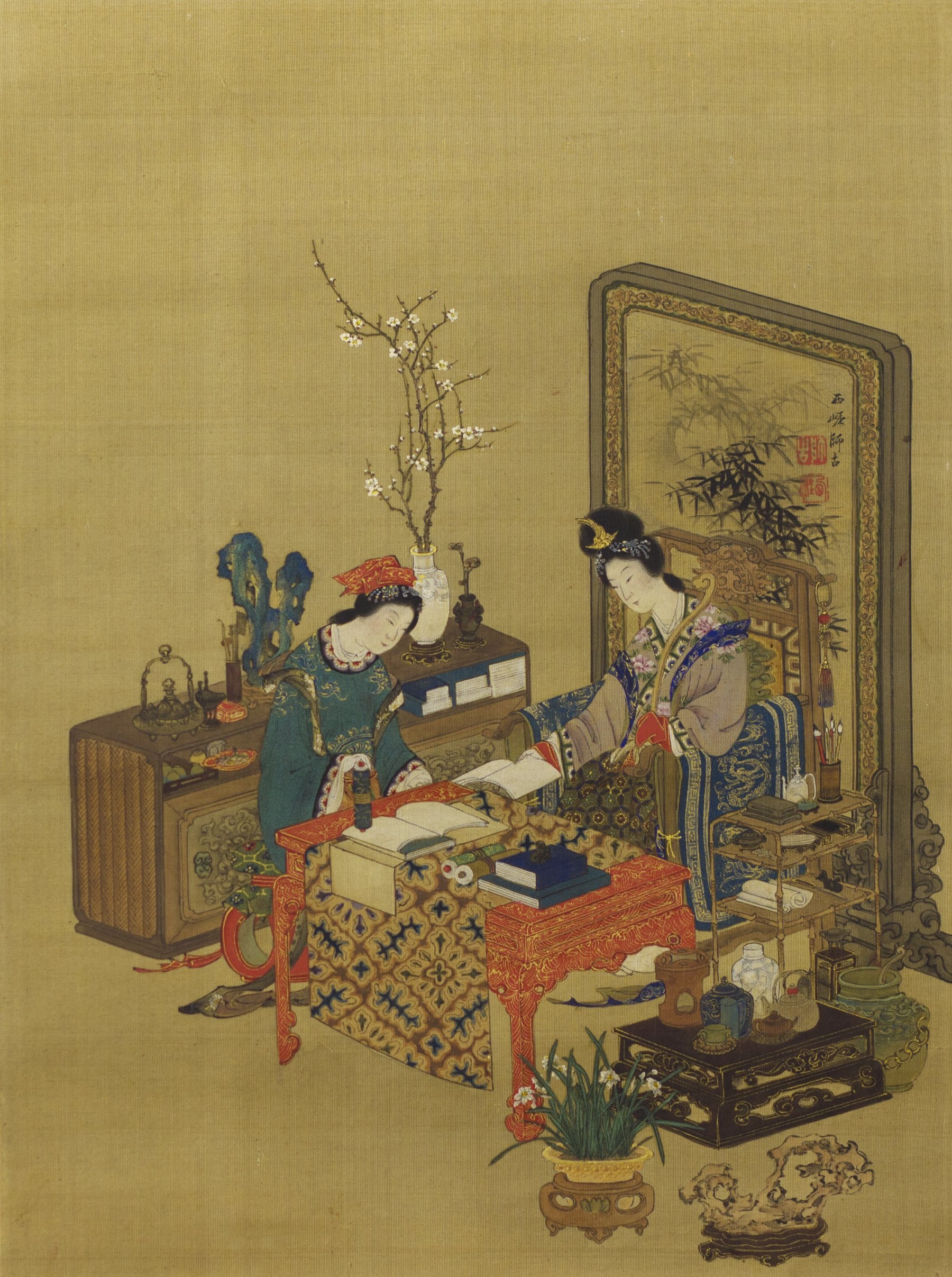 Box inscription:
“The two paintings ‘Peonies and Peacocks” and ‘The Qiao Sisters Reading Books’ were painted by the old master Seigai Hazama. His use of the brush was excellent and the application of color brilliant. Among small-scale works they are superior, what usual painters and craftsmen cannot equal. On an autumn day during the year 1891, Chodō saw them and wrote this.”
Seal: Chodō

In the first painting male and female peacocks perch on top of a garden rock; surrounding the rock, and greatly embellishing the picture, are red, blue, white, and pink peonies. All of this is rendered in great detail with the skill of the painter visible in every stroke. Both peonies and peacocks carry very auspicious connotations in Asia. Peonies are standard emblems for wealth and distinction, while peacocks symbolize dignity and great beauty, all of which are visual and appropriate attributes of the present painting.

The second picture portrays two women reading from opened texts. Other books wait their attention in a cabinet behind, which also supports such scholarly delights as a branch of blossoming plum. To the right appear such other literati accoutrement as brushes, tea utensils, and another garden rock, the whole backed by a screen decorated with bamboo in moonlight. The technical skill of the artist is astounding, and here devoted to creating an image suggestive of wealth, high social position, and great privilege. The Qiao sisters lived during the late Han or Three Kingdoms period, and were noted for their great beauty as well as for their assiduous study of books on military tactics. Their surname derives from Qiao Mountain, where the Yellow Emperor was buried; the Qiao family became the hereditary caretakers of the imperial tomb.

The creator of these lovely paintings was Hazama Seigai (1811-1878), born in Yamaguchi and studied painting with Oda Kaisen (1785-1862) in Kyoto. Kaisen in turn had studied with Matsumura Goshun (1752-1811), founder of the Shijō school which combined the realism of Maruyama Ōkyo (1733-95) with the idealism of the Nanga school. It would thus seem that Seigai, in the exquisite realism of his paintings, adopted something of the realism of Ōkyo. While it might be thought that these two paintings are surviving members of an album of large dimensions, they were recorded as a pair only twenty-five years after their creation, apparently already mounted together as they are today. The paintings are thus most likely to be examples of the category of xiaopin, “small-scale,” works known at least since the Northern Song era.