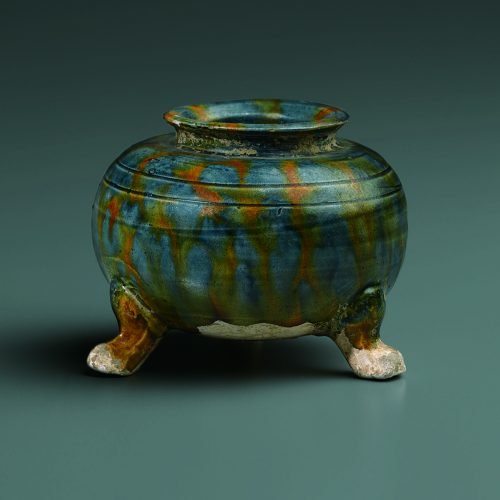 This small sancai tripod vessel here and the following two items (nos. 28 and 29) represent another method for supplying or replenishing an inkstone with water. Each vessel would have been accompanied by a small spoon or scoop to ladle the water onto the inkstone.

The sancai earthenware tripod and the following brown-glazed stoneware vessel, an early product of the Yaozhou kilns in Shanxi province that was famed during the Song for celadon production, are descendants of one of the oldest ceramic forms produced in China. The inventive “three-leg” design of Neolithic potters allowed a vessel to be straddled over a fire for heating or cooking. During the subsequent Bronze Age two signature forms set the stage for continuous production by and large into present times: the hollow-legged li and solid-legged ding set. Even a li-tripod ashtray in a Chinese restaurant today carries the ancestral DNA of the ancient li and ding.

The jewel-like tripod here from the Tang period gains its laurels on a winning combination of cobalt oxide blue and iron oxide amber colors. A similar small vessel in the Meiyingtang collection, published by Regina Krahl in Chinese Ceramics from the Meiyingtang Collection (vol. 1, London, 1994, no. 260, p. 151) is attributed to a kiln in Henan province where such three-colored wares are known to have been produced during the Tang dynasty. It might be noted that the excavations at the Tang period kilns at Huangpu, Tongchuan, Shaanxi province, predating there what are known as Yaozhou wares, also yielded small sancai-glazed wares, including tripods.