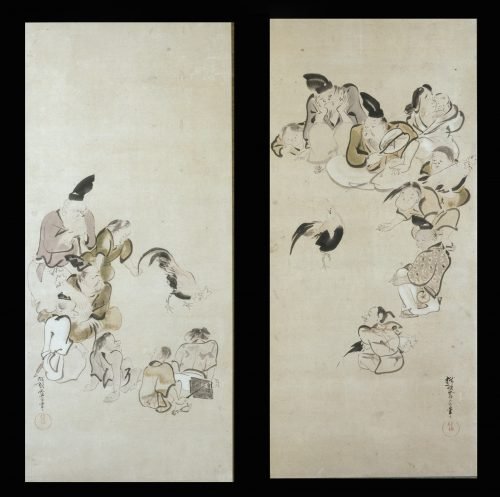 Cockfighting was known during ancient times in most countries, from Greece and Rome to India and China, from where it spread to Japan. Popular in Japan from the 8th century onward among the upper classes, by the Edo and Meiji periods it had become more widespread and was accompanied by spirited gambling. In the present paintings, although the cocks are not yet engaged in battle, the lively calligraphic brushwork produces a dynamic, energized scene, which makes us feel that the action might ensue at any moment.

The artist, born in Edo, was adopted by and studied under the great painter Sakai Hoitsu (1761-1829). The subjects addressed by Hoitsu and the other painters of the Rimpa school were far-ranging and such common secular themes as tilling and cultivation, festivals and special events, were represented among them. Although Oho here depicts by and large the common folk, low-ranking bureaucrats, recognized by their hats, have also joined the festivities.