A boatman poles his craft over strongly-patterned and frothing waves along a river that emerges from hills in the background. A very decorative pine with patches of lichen rises from one of the hills to complete a scene that features nature and design, repose and movement, and lovely coloring together with expert drawing.

This subject seems to have been painted solely by artists of the Rimpa school (fig. 1), one of the earliest having painted by Ogata Korin (1658-1716), a major practitioner of this style, for card games (karuta after the Portuguese carta.)[1] The basic idea of any karuta game is to quickly determine which card out of a given array is required and then to grab the card before your opponents can. Karuta uses two kinds of cards: the yomifuda, “reading card,” and torifuda , “grabbing card;” players must find the last two lines of a waka poem given the first three lines. As the yomifuda is read, the players must look and grab the associated torifuda before anyone else.

One of the most common of this type of card games is the uta-garuta in which one-hundred “poem cards” bear one-hundred waka poems, in the case of the Hyakunin Isshu (“One-hundred people, one poem each”) compiled during the early 13th century by the poet Fujiwara no Teika and traditionally played on New Year’s Day. Each yomifuda card bears a portrait of a poet with the first half of his or her poem; usually the torifuda card doesn’t have an image, but Korin illustrated the torifuda cards as well, and one—illustrating the poet Sone Yoshitada—has an image almost the same as the present one by Hoshuku (fig. 2). The poem on Korin’s image read: “(Just like) a boatman losing his rudder, crossing the Ura Strait, I wonder where my love goes?” When Hoitsu compiled his Korin Hyaku-zu in 1815, he included Korin’s painting, so the composition would have been well-known to Rimpa painters.

The earlier history of the theme is obscure. A screen in the Freer Gallery of Art with comparable boatman bears a poem inscribed by Koetsu (1558-1637), while a work by Korin, “Po Chu-i Crossing the Ocean” (fig. 3), illustrates the subject that is sometimes associated with the theme of the present painting.[2]

Sakai Yuiitsu, called Hoshuku, was born in Tokyo in 1878, the son and pupil of Doitsu. When Doitsu died, in 1913, Hoshuku inherited the atelier Uge-an which had been founded by Hoitsu and successively inherited by Oho, Oitsu, and Doitsu. The original Uge-an was destroyed by fire in 1865. Hoshuku is known to have remained active into the early Showa era (1926-1988) but his date of death is still unknown. A very similar boatman appears in the Hamamatsu-Zu screen of the 16th century, and Hiroshi Kawasaki suggests that the “Boatman” series derives from this source.

1. Most of the information for this entry as well as the title was provided by Hiroshi Kawasaki and I am very grateful to him for the assistance.

2. Po Chu-i’s works were highly renowned in Japan, and many of his poems were quoted and referenced in The Tale of Genji by Murasaki Shikibu. 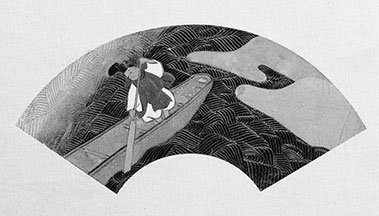 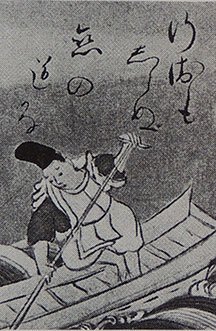 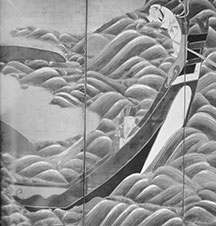