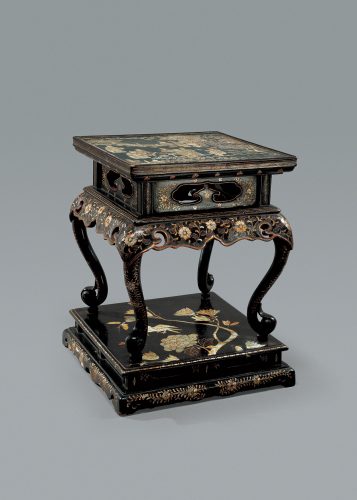 This beautiful stand could have been used to hold a vase of flowers or an incense burner and, like many utilitarian objects for the elite, it is also a work of art. The scene depicted on the black lacquer top is a snapshot of an upper class gathering, eight gentlemen attended by five servants in an elegant garden with all of the furnishing and paraphernalia necessary for their enjoyment and the garden dominated by a great peach tree. The tiny fragments of carefully prepared mother-of-pearl create a scene of light and subtle color, an effect repeated in the floral designs on the pierced midsection apron and cabriole legs The square base is decorated with a rather charming image of a bird hovering over a gracefully curving branch of flowers with a pair of butterflies nearby inlaid with relatively larger pieces of the iridescent material.

An exuberant tradition of lacquer production was supported in the Ryukyuan islands (known after the 1872 annexation by Japan as Okinawa) from the end of the 14th century when ties were established with the newly established Ming dynasty in China. Thenceforward the Chinese craftsmen and their wares served as teachers and models with the Japanese market providing inspiration and the Ryukyuan craftsmen at times marching to their own drummer. The theme here, in fact, suggests thinking out of the box of Chinese tradition. A massive peach tree in an otherwise perfectly traditional scholar’s garden suggests that the locale might actually be the garden of Xi Wangmu, Queen Mother of the West, where her peaches of immortality were tended and harvested but where the occupants were conventionally her retinue of female attendants. Here, however, are scholarly gentlemen, some engaged in the normal activities transpiring during such a gathering whereas others have been seduced by the promise of the fruit they are seen plucking from the tree.

Even so, the similarity between Ryukyuan and Chinese lacquer wares is sometimes great enough to make attribution difficult. The style of a lacquer stand believed to have been produced in China during 15th-16th centuries (fig. 1) was the basis for what are claimed by specialists of Ryukyuan wares to have been produced in the Ryukyu Islands during the 17th-18th century (figs. 2-3). The present stand appears most closely allied with these Ryukyuan wares and particularly in the use of certain specific motifs— for example, the character of the feathery scrolls and the textile patterns of the scholars’ robes—as well as the character, color, and condition of the mother-of-pearl inlay. 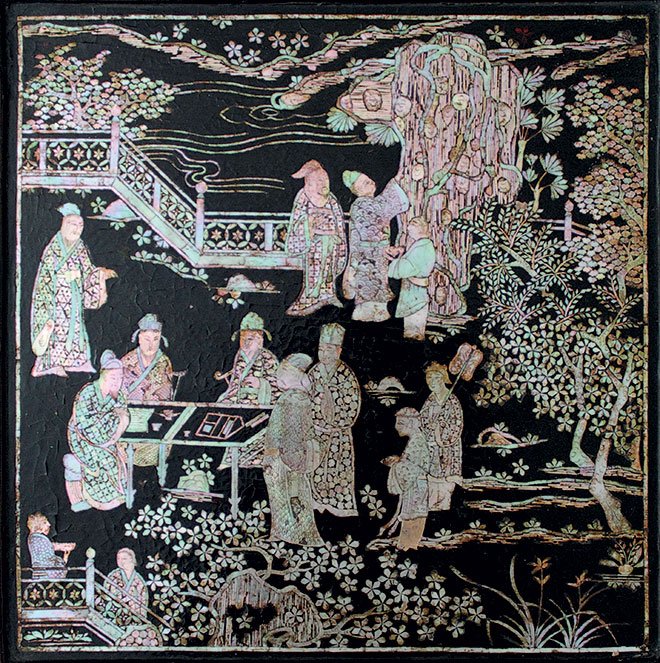 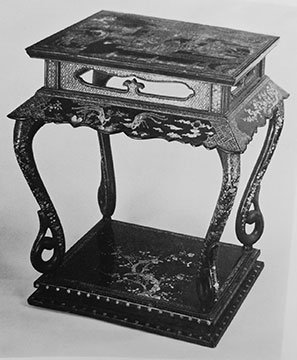 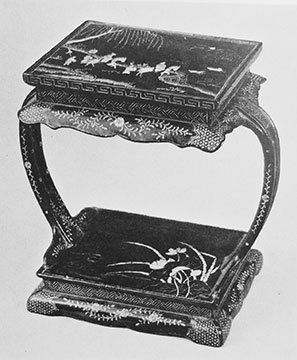