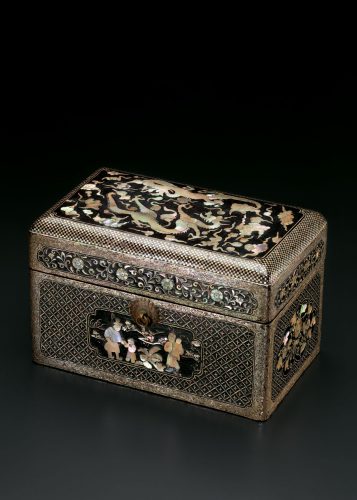 The black lacquer rectangular box is inlaid with silvery white mother-of-pearl with pink and green highlights and can be viewed from either oblong side. They are inlaid with figural scenes that appear to be of equal importance and each is applied with a metal chrysanthemum-shaped mount suspending a loose ring. The cover is inlaid on its top surface with a pair of three-clawed, spiny dragons cavorting wildly through fat swirling clouds. The dragons each extend one front claw, the talons stuck in large flaming pearls. The scales are finely incised and the faces with long snouts and open mouths whimsically rendered, one with a pair of straight upright horns and two bulging eyes visible, the other in profile with black-dotted eye glaring and a two-pronged antler rising from its head. A frame with canted corners encloses the scene and occupies almost the entire top of the lid against a checkerboard patterned ground that covers the rounded edge of the lid. The short sides of the lid are inlaid with lotus on scrolling vines and chrysanthemum on similar vines on the long sides, each floral scroll within an oblong foliate panel floating on an almost solid mother-of-pearl ground comprised of rows of tightly packed tiny rectangular pieces of the shell. This ground is repeated on the box framing a diaper-pattern ground, each small diamond-shaped cell containing a small cross, the diaper ground surrounding a foliate panel inlaid with a figural scene. On one side a bearded gentleman in long robe and cap lounges against a tree in a garden as he watches his attendant setting free a bird shown in flight above the cage. On the reverse of the box the scene is comprised of a family in a garden, the father in a blousy shirt and pantaloons with ballooning legs and wearing a high hat as he holds a young boy’s hand; nearby the mother in long robe grasps her infant. All the facial features, clothing and floral motifs in these scenes are enhanced with incised details. On the short sides of the box ruyi-shaped medallions against cross-motif diaper grounds enclose floral sprays, a large chrysanthemum and two smaller flowers blossoming from a single leaf-laden stem in one medallion and on the opposite side a large four-petalled flower in place of the chrysanthemum. The base is covered with brown lacquer and the interior of the box is lined with a brocade woven with duck crests on a stylized wave ground in gold and blue.

This box is more than unusual, more than the “off-the-beaten track” Ryūkyūan artisans enjoyed navigating. Exceptional in its primary designs, a daring combination of the world of humans in the gardens below and that of dragons in the skies above, and enriched by intriguing secondary filler motifs, the box is a creative contribution to a world already rich in idiosyncratic treasures.

Produced with large pieces of mother-of-pearl that in and of themselves contribute to the bold effect of the design, the paired dragons, f lashing sharp talons, light the darkened sky with their gleaming scales as the clouds join with them in offering the bounty of the heavens on this unusual Ryūkyūan lacquer box.1 A quirky feature that the dragons (which are individualistically postured) share is a jagged saw-tooth dorsal fin running the entire length of body and tail. Whereas dragons are often paired with phoenix, paired dragons are not uncommon in Ryūkyūan lacquer, nor are dragons that are individualistic, not simple reproductions of their forbearers or close relatives (fig. 1). It is not clear if the three-taloned claws of the dragons represented on the present box or those in figure 1 have a particular significance; three, four, and five-taloned claws are all produced and sometimes a single dragon will have a different number of talons on fore and back claws (fig. 2).

Adding to a sense of pandemonium created by these dynamic creatures, the clouds fill the sky not only with their own swelling forms but also with substantial vapors extending in all directions, with additional small plump clouds crowding the heavens even more. In contrast to this fantastic world above are the quiet scenes in the world below. The bearded gentleman in one tableau is meant to evoke the renowned Chinese recluse poet Tao Yuanming (A.D. 365-427). The scene recalls lines from his celebrated Guiqulai, “On Returning Home.”2 “The caged bird longs for its old woodland….Too long a captive in a cage, I have now come back to Nature.”3 The retired poet identifies with the bird winging its way to freedom just as he himself had gained freedom from his own “cage,” a stifling official position in Nanjing, and returned to an idyllic life in his native home.

The family gathered in a garden on the opposite side of the box might also be a reference to the life of the poet. Tao had five sons who inspired a poem, Blaming Sons, in which he admonishes his boys even as there is “a hint of pleasure in his sons’ preference for play over reading, writing, and arithmetic.”4 The little boy appears to have been caught in some mischief as his downcast eyes suggest, with his mother holding one of his brothers looking on. This does not explain, however, why the male adult reminds us, with his baggy shirt and trousers and unusual hat, of a foreigner, perhaps a Portuguese merchant, a common enough sight when Europeans were sparring for trade advantages in East Asia. When figures, such as the human folk here, are depicted in Ryūkyūan lacquer, they are sometimes comparable in style to Ming-dynasty Chinese counterparts, with minuscule details scratched on the intricately cut lacquer pieces comprising the forms. However, in others, as seen here, the figures are executed in a style more akin to the dragons on the lid, unifying the piece technically and artistically.

Medallions containing floral sprays close in design and detail to the present comprise the major decoration on the four sides of a long rectangular box with a pair of phoenix on the lid (figs. 3-4). The large mother-of-pearl pieces forming the phoenix and floral sprays are stylistically similar to our dragons and f lowers, and the medallions contain the unusual cross- decorated diaper and are furthermore against a checkerboard ground with a cobblestone rim, all similar to the present box. Metal mounts with rings are applied one each on the long sides of the box for lifting, also similar to the present example. The cross-filled form of the diagonal diaper and the dense cobblestone-like ground surrounding the scenes both appear on a covered bowl, the diaper pattern as a background on both bowl and lid while the dense cobblestone mother-of-pearl inlay fills the tomo-e (triple spiral) crests on the lid and also covers its rounded knob (figs. 5-6).

These secondary patterns are relatively unusual whereas the chrysanthemum scrolls in the borders are not. They are used to advantage in the decoration of cupstands of the 16th-17th century, both on their rounded receptacles fashioned to support tea bowls, and on the upper and lower faces of the wide flanges typical of these forms (figs.7-8). And, quite likely just by chance, they are a perfect enhancement for an object where Tao Yuanming, known for his love chrysanthemum, is enshrined.

1. The Ryūkyūan islands that form an arc stretching from Kyushu to Taiwan, have been known in Japan and the west as Okinawa since annexation by the Japanese in 1872. Connection with China prior to that, however, was strong and an artistic link with the mainland is expressed in the lacquer ware of the Ryūkyūan people. The sea around them provided the materials for the mother- of-pearl inlaid lacquers that became their singular ware. Even as emulation of Chinese styles continued over time, an adventuresome spirit and creative independence resulted in products that they could claim as typically their own. The Ryūkyūan techniques for producing mother-of-pearl lacquer are addressed in Craft Treasures of Okinawa, (The National Museum of Modern Art, Kyoto), Tokyo, 1978, pp. 253-260, and James Watt, “Lacquer of the Ryūkyū Islands,” in East Asian Lacquer: The Florence and Herbert Irving Collection, Metropolitan Museum of Art, New York, 1991, pp. 329-337. Mention should also be made of a pioneering work in English on the history of Ryūkyūan lacquer, that is, Sir Harry M. Garner’s Ryūkyū Lacquer, Monograph Series 1, Percival David Foundation of Chinese Art, London, 1972.

2. Hiroshi Kawaski, more erudite and thoughtful than the present writer, immediately recognized the subject as a reference to Tao Yuanming and his Ode to Returning Home, and graciously passed the idea on to me. 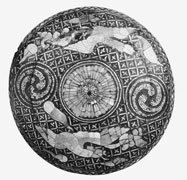 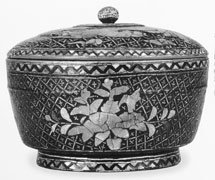 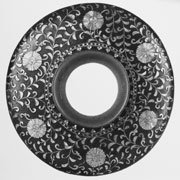