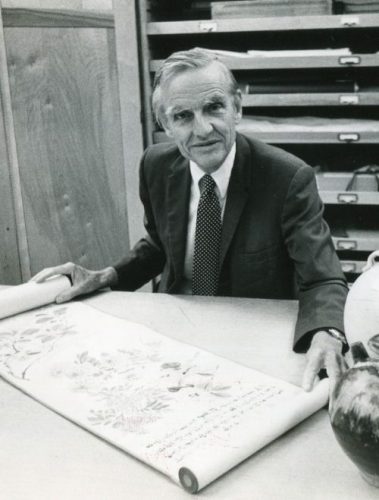 I got my Masters Degree from the Center for Chinese Studies at the University of Michigan in 1976. My masters was a broad based China concentration degree and I thought, for a lark, I would take a Chinese art history course. I then realized, after taking a course with Dick Edwards (Steve Goldberg was my TA) I was hooked. At that time the “big three” were Cahill, at Berkeley Wen Fong at Princeton and Barnhart at Yale however, I would venture to say, Dick Edwards produced many connoisseurs of Chinese art in his own right. . I was only a masters student and would not compare my experience to my classmates in the doctoral program but I remember in the darkened art history class, Dick’s shadow behind the podium he would look like the Fourth Lohan (see the painting in the current exhibition). He would put up a slide and just have a room full of students look for what seemed like an eternity, in silence. He would not say anything. He wanted you to decide for yourself by looking what was happening in the painting. He forced us to look. He also instilled in his students the importance of direct contact with a work of art. Dick’s students went on to populate curatorial positions in many museums across the country, as well as teaching a new generation of Chinese art historians. I am grateful and was lucky to be at at Michigan during that golden era, and for years and to this day benefit so much from contact with my classmates

As I reflect on the death of Richard Edwards, I am brought back to the time when I first came upon his pioneering book, The Field of Stones: A Study of the Art of Shen Chou (1427-1509). At the time, I was studying in the graduate program in Asian art history, at the University of Hawai’i, on a grant from the East-West Center. I was deeply moved by the sensitivity with which he described the artist’s paintings, the poetic quality of his writing, and his choice of an artist to write about. I knew immediately that I wanted to study with him at The University of Michigan. There is one observation that he made in a graduate seminar on Chinese painting that I will always remember: “For the peasants working in the field, there is no ‘landscape’, it is their world.” Sadly, Richard Edwards’ passing marks the end of the generation of dedicated scholars that founded the field of Chinese art history.

I am grateful to Richard Edwards for teaching me the importance of connoisseurship. This overarching commitment to aesthetics heavily influenced the course of my thirty-six year career as an academic and curator. I first met Professor Edwards in the fall of 1969 when he was at the Freer Gallery of Art with a group of graduate students from the University of Michigan. I quickly learned that one of the perks of studying at Michigan was funding from Charles Lang Freer to subsidize trips to the Freer and other locations to study original works of art. This emphasis on connoisseurship was a recurring theme throughout the graduate program. We learned by looking at art on various trips as well as at the University of Michigan Museum of Art. Not being able to choose between an academic or museum career, I pursued both simultaneously. Working at the Museum as well as serving as a T.A. offered tremendous learning experiences.

Dick’s friendship with the Director of the National Palace Museum in Taipei, Dr. Chiang Fu-tsung, as well as the Curator of Painting and Calligraphy, Chiang Chao-shen, enabled Dick’s students to work at the museum. I worked in the Painting and Calligraphy department while researching my dissertation. Access to the best collection of Chinese paintings available at the time, 1974-75, was invaluable. Scholars would come from all over the world to view them and the graduate students in the department would eagerly await to their enlightening comments. While I was in Taipei, Dick taught two seminars focusing on Wen Cheng-ming (1470-1559). Unfortunately, I could not take them, but when the exhibition which resulted from those seminars was on view at The University of Michigan Museum of Art in the winter of 1976, I took full advantage of the opportunity to view first hand the sixty-two paintings and calligraphies borrowed from thirty-two lenders.

This was particularly relevant to my dissertation topic, “Wen Chia (1501-1583): Derivation and Innovation”, 1981. At the time I did not realize how Confucian it was for me to write about the son of Wen Cheng-ming. Another of Dick’s students, Louise Yuhas, wrote her dissertation on one of Wen Cheng-ming’s pupils, Lu Chih (1496-1576). Dick had inspired my interest in the Wu School and this led to my organizing the exhibition The Literati Vision: Sixteenth Century Wu School Painting and Calligraphy which was shown at the Memphis Brooks Museum of Art and the Kimbell Art Museum in 1984 and 1985. I have curated exhibitions and taught in Kansas City, MO; Memphis, TN; Birmingham, AL; San Antonio, TX; Houston, TX; Duxbury, MA and Hartford, CT. This career would not have been possible without Dick’s erudition and guidance over many years.

Professor Edwards taught his students to look at a work of art and describe it in detail. During one seminar, he showed a slide of an acclaimed painting by a famous artist. All the graduate students present were familiar with the work, and the seniors among us were challenged by Edwards to give a verbal account of the painting. One student quickly identified the artist, title, and date of the scroll and then gave a report on the work’s importance in the painter’s oeuvre and in the period as a whole. After a short but uncomfortable silence, Edwards asked another student to describe the painting – its figures, trees, rocks, mountains, and waters. He next asked how many of each motif there were and how the ink and brushwork used to render each might be described. Now satisfied that his question was fully answered, Edwards clicked to the next slide and again asked one of us to describe the painting. After two hours, everyone had explained a painting in the manner expected by our teacher. The moral of the seminar – and of this story – was clear, that the history of art is just that: history and art. Indeed, art is the source fundamental to history, and that while history remains important, art is paramount.

When I first went to the University of Michigan to study Chinese painting with Professor Edwards, I wanted to learn what was good and bad and why it was so. But Professor Edwards did not teach the way many others did. Some teachers are only too ready to make pronouncements in order to train students; to pass on their standards of discernment and quality. Professor Edwards was often frustratingly contrary in this regard. One student who transferred from another graduate program almost went crazy with his avoidance of professorial proclamations. Professor Edwards wanted us to see for ourselves and put a premium on our learning to articulate what we saw. He guided and questioned us more than he regurgitated what he knew. Now, I sense his approach to students was much like his approach to the history of art; focus on the individual. His ground-breaking books and exhibitions focused on individual artists rather than general trends during large sweeps of time.
I remember one trip back to Cleveland with Professor Edwards, when Dr. Sherman E. Lee showed us an early Chinese painting the museum was considering for purchase. Dr. Lee asked Prof. Edwards, “Dick, do you think it’s real?” Prof. Edwards took off his glasses, leaning forward to examine the scroll with his eyebrows almost brushing the surface. He stood back up and said “Yes Sherman, it’s a real painting.” Exasperating to some at times, Prof. Edwards wanted people to look intensely and understand what was going on in a painting so they could appreciate what an artist was trying to do.
Professor Edwards felt the individual work of art was the most important thing; not the commentary by others about the work or the artist. One of his first exhibitions at Michigan was also one of the first ever to focus on an individual artist, Tao-chi (Shitao). Professor Edwards enjoyed telling about his escorting Zhang Daqian through the exhibition. Zhang, the notorious forger of Tao-chi, declared that one painting was Tao-chi’s best and another was done by Zhang himself. Professor Edwards always laughed that Zhang got things absolutely reversed, probably trying to elevate his own reputation.
Thanks to Professor Richard Edwards, the University of Michigan was home to the Asian Art Photographic Distribution program (AAPD), which was the only source in the U.S. for images of every painting in the National Palace Museum, Taipei, as well as images of major exhibitions and collections in the U.S. As far as images go in the pre-digital age, the AAPD office, with its packed file cabinets, was one of the greatest visual resources a graduate student could imagine.
Through exhibitions and exchange students, catalogs, books, research and resources, Professor Edwards created a unique atmosphere for students. They will never forget him, nor will I.

My wife Fang-mei Chou, who was Prof. Edwards’ last MA advisee, and I (specializing in Chinese literature) have had the privilege of helping his family catalog his books, artworks, papers and correspondence, some with important Chinese contemporary artists.

Part of Prof. Edwards’ legacy consists of the letters he wrote to his family during World War II— even then he was observing the landscapes around him and describing them in beautiful, vivid detail. His pacifism comes through powerfully in these letters.

Prof. Edwards had a deep love of poetry, but it was only when going through his papers that we discovered he, himself, wrote poetry. Prof. Edwards was perhaps too modest about his poetic skills. The most conspicuous features of these poems are their close observation and deep appreciation of nature. Recurrent themes are the change of seasons, the cyclical or wavelike aspect of time, and sorrow over the destruction of the natural environment. He left approximately 200 poems, of which he had typed up and “finished” around 50. The rest were still jotted on small pieces of paper, bookmarks, old envelopes, pieces torn from newspaper corners and grocery bags, and even tiny sales receipts. He tossed these into a bulging folder marked “poetry” (in this regard, his method of composition was like that of the Tang poet Li He, who was fond of riding out, jotting down couplets as the ideas struck, and tossing the slips into a bag). Most are haiku-like in their brevity.

With his children’s permission, I’ll share one, titled “History,” that expresses thoughts relating to art history. It was jotted on one of the tiny slips in his folder.

No facile brain can ride
along the air of truth
the sight, the touch
—and silence
echoing—