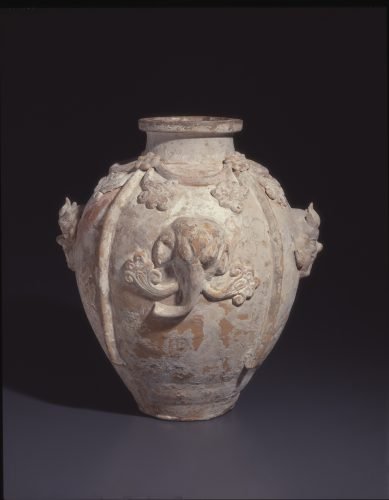 This unusual vessel is of egg shape with flat base a slightly incurved neck and flat square-cut mouth rim. The surface is divided by raised ridges into vertical quadrants linked at the top by swags fastened with rosettes that drape palmette style leaves, two quadrants containing images of elephant heads alternating with two grinning taotie masks, all boldly modeled high-relief. The pale reddish-orange toned earthenware is covered with extensive white pigment with some red and black detailing remaining.

Inspired by the form of a Buddhist pagoda or reliquary, the presence of such vessels in 8th century Tang tombs introduced an element of the faith into the otherwise worldly or imaginative character of funerary paraphernalia. The elephant was the vehicle of Samantabhadra, the bodhisattva of wisdom who is believed to have transported the scriptures of the Buddhist faith to China. The elephant was indigenous to China in ancient times and still existed in certain areas in the south during the Tang period, when it was thought of as an exotic and mysterious creature. A vessel similar to the present with four elephant mask appliqués and a lid on a pedestal in the shape of an elephant was excavated in Xi’an in 1966.1 The two other quadrants contain masks which harken back to the iconic taotie masks of ancient China and thus also connect the vessel to indigenous tradition.

1. See The Glory of the Court: Tang Dynasty Empress Wu and Her Times, Tokyo, 1998, no. 61, p. 110 for the vessel excavated in the suburbs of Xi’an, Shaanxi province, now in the Museum of History in Beijing.