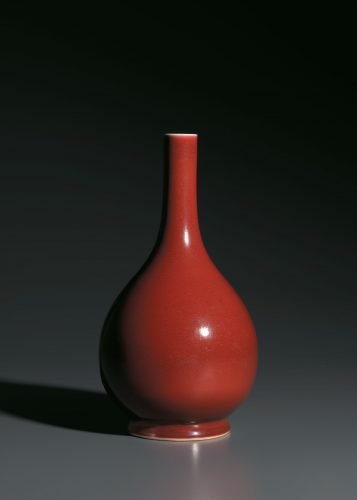 Of fine proportion, the classic pear-shaped body gently rises to a tall, thin, cylindrical neck and is supported on a slightly flared foot surrounding the flat recessed base. The deep garnet-color glaze is evenly applied and exhibits an orange-peel texture and soft lustrous sheen. The color has drained at the lip that now appears white, while the interior and the base are covered with a transparent glaze.

During the Qing dynasty (A.D. 1644-1911), an immense range of colors— from glowing pinks to acid yellows and cucumber greens, from shimmering turquoises to majestic cobalts, from café-au-lait browns to mirror blacks, from shocking pinks to blood reds—were the clothing for the pristine white porcelain bodies produced at Jingdezhen. In the West, until recent times, the Qing gallery of the Percival David Foundation in London was a real-life kaleidoscope comprised of these spectacular monochromes produced by the Chinese potter, a place where visitors entered a magical world where colors did not clash or collide but joined in a symphony that was a tribute to these latter day, reckoning by Chinese dynastic time, wizards of the art. While the Percival David collection was noted for the imperial provenance of the majority of these wares, others graced its shelves in its old home on Gordon Square and the present piece would not have found itself out of place there, nor in the collection’s present habitat.

A keen awareness from around the 13th-14th century onward of the efficacy of copper oxide to produce a range of red tones resulted in the production of underglaze-red painted porcelains as well as monochrome red wares. While the copper agent was a far more intransigent partner with porcelain than the flexible and malleable cobalt of ‘blue-and-white,’ Jingdezhen’s imperial workshops were goaded into its use by an emperor, the founder of the Ming dynasty (A.D. 1368-1644), Zhu Yuanzhang, whose surname meant ‘red.’ In striving to create the necessary visual symbols of his legitimacy, Zhu Yuanzhang, who ruled as the Hongwu emperor (A.D. 1368-1398), encouraged the production of porcelains that promoted and carried, in their very being, his illustrious name, and hence the production under his reign of monochrome-red and underglaze-red-painted wares.

A development in monochrome-red porcelain style is discernible through the Ming and Qing dynasties and the present example is nestled comfortably within the 18th-century production of this Jingdezhen specialty. The vessel’s shape was a spin-off of the traditional pear-shaped bottle that had appeared for centuries within the repertoires of potters at kilns producing all varieties of wares throughout China. By attenuating and narrowing the neck and greatly reducing the flare at the lip, a new look was achieved that was elegant, graceful, fragile, even precious, and the slimmed down vessel a perfect mannequin for any fashionable color, such as the seductive red seen here.

The texture of the red glaze of the present piece is described as having an orange-peel effect. ‘Orange-peel’ is a term used to describe a glaze surface marked by tiny holes or pores, produced by gasses escaping from the glaze and forming tiny holes that are frozen in place during the cooling process. The orange-peel appearance here recalls that of the red monochromes produced during the Xuande era (A.D. 1426-1435) of the early Ming dynasty when such an effect was a hallmark of the wares. The secret for producing the distinctive ‘fresh red’ of the early Ming period had been lost and efforts were made during the Qing to reinvent the process. It was during this period that the glazes, which were more fluid in firing than the earlier glazes, resulted in thinner coatings and a white appearance around the lip and mouthrim where the color drained from the glaze allowing the white porcelain bodies beneath to show through.[1]

The orange peel effect was likely intentional; a good number of 18th-century monochromes bearing apocryphal Xuande marks suggests where the potters were trying to go with their work. Their experiments in the use of various coloring agents led them not only to reproducing past achievements but to the development of very innovative colors, some absolutely dazzling, shocking, jazzy. That such ‘china’ graced the mansions of European aristocracy is some indication of how adventuresome the taste of that elite must have been. The fashion to grandly display these brilliantly colored porcelain confections on mantelpieces, tabletops, on open shelves or in cabinets made especially for them was adopted in America, where collectors now vie for their acquisition with a burgeoning population of Chinese contemporaries who have recently rediscovered this treasure-trove of Qing wares from their past.