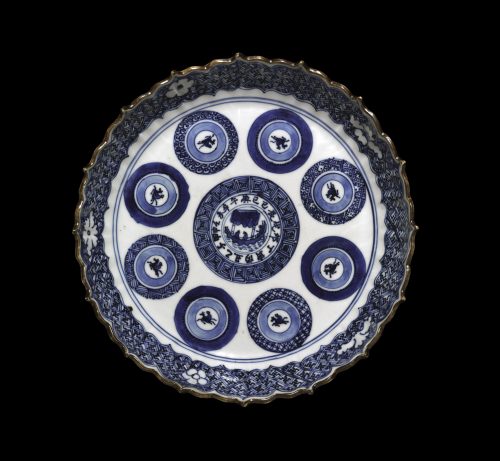 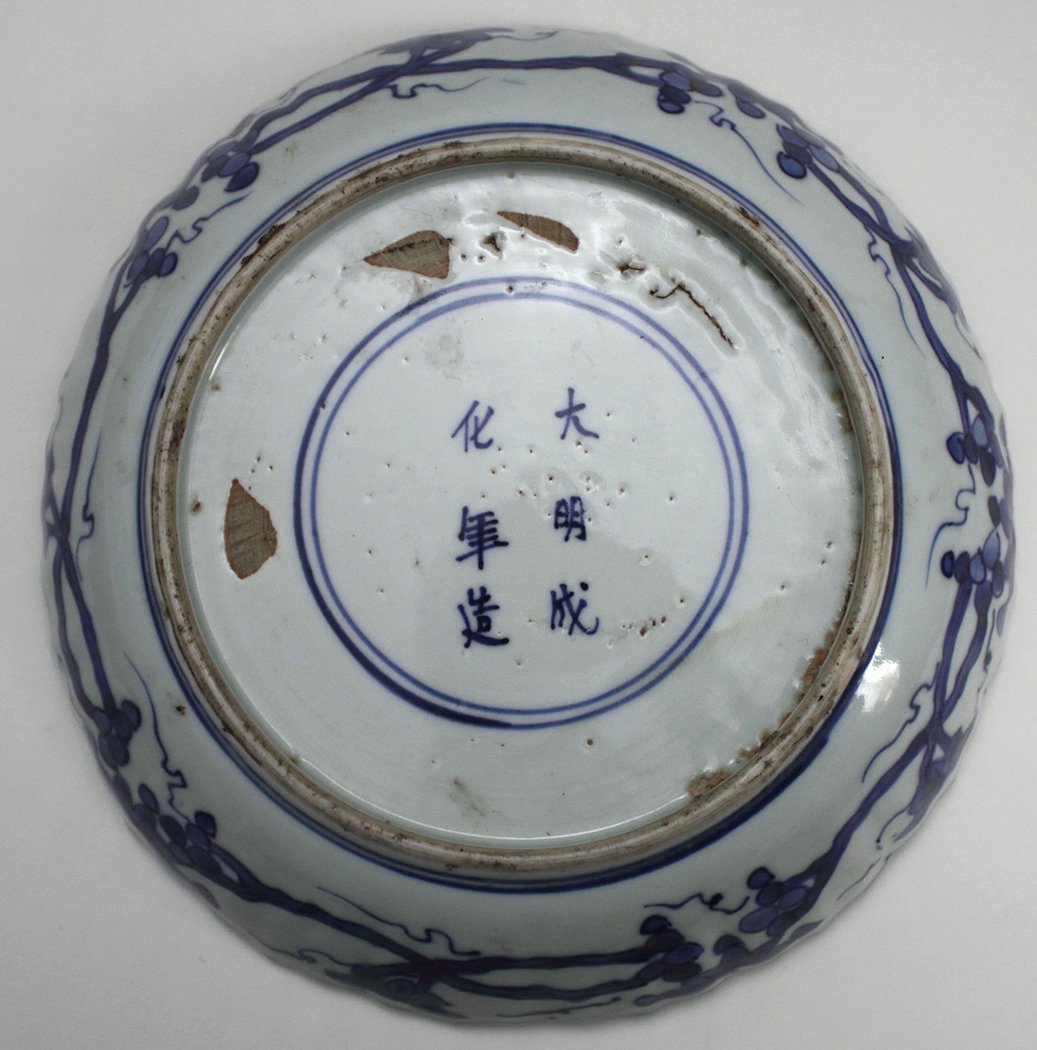 The deep porcelain dish with multi-foliate rim is thick-walled, heavy bodied, and finely painted with underglaze-blue décor. A central medallion on the flat interior enclosed by a double-line border contains a canopied boat with a boatman and his two passengers, the scene encircled by an eighteen-character inscription comprising the first nine combinations of the “Ten Heavenly Stems” and “Twelve Earthly Branches,” all within a densely drawn key-fret border. Eight smaller roundels encircle the central one, each with a tiny rider on a galloping horse, four within concentric light and dark blue bands alternating with four bordered with either a fret, scroll or foliate diaper pattern. The fluted cavetto is painted with five different blossoms in white reserve on a wide wan-fret band under the sharply articulated bracket-foliate rim, the edge treated with a brown wash. A massive scrolling grape vine with plump grapes, large leaves and tendrils unfolds on the exterior. An apocryphal six-character Chenghua mark, reading Da Ming Chenghua nianzao is awkwardly written on the base within a double circle, all in underglaze blue, enclosed by the thick, sturdy foot of triangular section. The blue is rich in color, the glaze transparent and its surface bright, with pockmark-like pores on the base and some unglazed areas.

Kosometsuke (“old blue patterned”) is now a commonplace term in the world of Chinese ceramics and those familiar with the field are well-versed in the biography and physical characteristics of the underglaze-blue decorated ware and its overglaze-enamel partner, ko-aka-e, (“old red-decorated”) ware. These wares were produced for the Japanese market during the late Ming period, from around 1620 onto the end of the dynasty. The ware known as Shonzui was technically and artistically the successor of kosometsuke but made along side of it during perhaps the last decade or so of the Ming and even into the Qing. This chronology is offered up with the understanding that we do not have a body of securely dated material to rely upon.

The name of this “new,” well-constructed and carefully decorated category of late Ming period export ware is taken from an inscription that appears on a number of the pieces: Wuliang dafu Wu Xiangrui zao, “Made by Wu Xiangrui, Wuliang Dafu.” illustrated here on the base of a bowl (fig. 1). The Chinese name, Xiangrui, is pronounced Shonzui in Japanese and hence the ware made for the Japanese is known by its Japanese name. Taste within Japanese tea circles had evolved into a mindset where elegance, refinement, and sophistication were desired attributes in contrast to the prior rough and ready, spontaneous and natural kososmetsuke aesthetic. Note the careful potting, regularity, symmetry, thoughtful design and careful execution, and the well-protected rim, all important features of the type.

Notable decorative peculiarities of Shonzui include the plethora of finely executed diaper patterns, the repeated appearance of the rider on horse or donkey, and the incorporation of characters into the decorative design and not infrequently the same sequence of characters as seen in the border here. The inscription consists of the first nine combinations of the sixty possible when combining the “Ten Heavenly Stems” and “Twelve Earthly Branches,” upon which the cyclical dating of the Chinese calendar is based. The inscription is likely decorative rather than meaningful, even if the stems and branches suggest the passage of time, and therefore introduce a philosophical layer of meaning to this very compelling tea ware.

The present dish is one of several distinctive Shonzui shapes, all having technical and aesthetic features in common, an example of one of these shown here (fig. 2). A small number of dishes almost identical to the present have been published and one of them shown with its apocryphal Chenghua reign mark (figs. 3-5). We might point to one variant of the present medallion-decorated Shonzui multi-barbed dish, that with a large rabbit against a diaper ground as the main décor, with the expected sharply articulated rim treated with an iron brown coating, the exterior with bold floral branch, the base with an almost identical inscription, and the base exhibiting the same minor technical irregularities as the present (figs. 6-7).

Very few examples of this exceptional Chinese porcelain creation have come on the market, which is some indication of its rarity but also the reluctance of owners of such wares to part with them. Further examples of Shonzui dishes with the apocryphal Ming dynasty marks, both Chenghua and Jiajing, can be see in the Idemitsu Museum of Arts in Tokyo and published in their museum catalogue, Chinese Ceramics in the Idemitsu Museum, Tokyo, 1987. nos. 850, 852, 853, and 855. 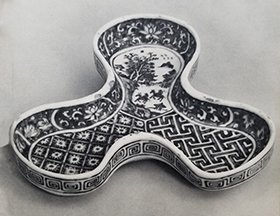 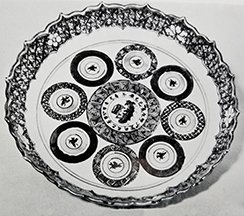 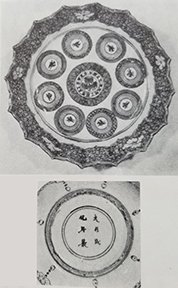 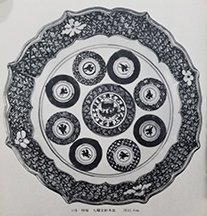 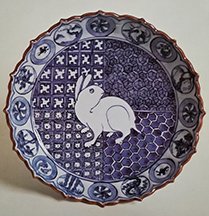 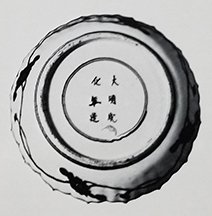