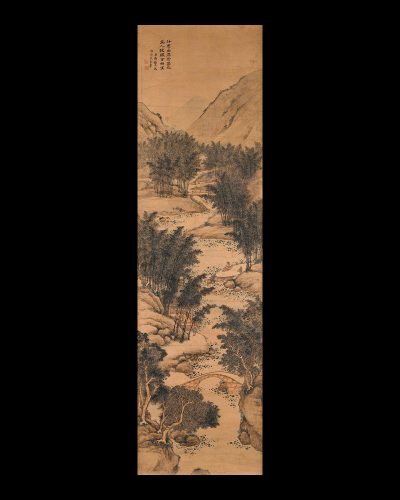 Inscription:
“Within the bamboo groves
flows a quiet stream,
and lotus covers the pond;
The host presents a sash
as that is suitable to both.
Qin Shi of Wujun (Suzhou) did this to celebrate the longevity of Master Bangshi.”

The focal point of the composition is a figure seated on the bank of a lotus-covered river, a servant standing in readiness behind him. In the foreground appear two other figures in association with a riverside pavilion shaded by groves of bamboo. A bridge in the far ground mirrors the more complex structure in the foreground and provides the narrative horizon above which rise only bamboo and mountains. The elegant style of presentation associates the artist with such Suzhou masters as Zhang Hong (1577-1652 or later) and Li Shida (1550–1620), who were his likely acquaintances.

Qin Shi, zi Zunyi, was from Suzhou in Jiangsu province, known for his landscapes characterized, as here, by classically elegant brushwork. Although his birth and death dates are not recorded in standard sources, his extant paintings indicate a period of activity at least from 1597 to 1620. An undated “Spring Ferry between Willow-lined Banks” suggests that Qin was also influenced by the styles of Shen Zhou (1427-1509) and Wen Zhengming (1470-1559), the progenitors of the later Suzhou style of landscape painting.[1]

During the late Ming era, many painters and especially calligraphers experimented with various media, going beyond the traditional paper and silk. Using satin, figured silk and satin, gold-coated paper, and, as here, gold-flecked paper, these artists created images that add another dimension to the viewing experience.