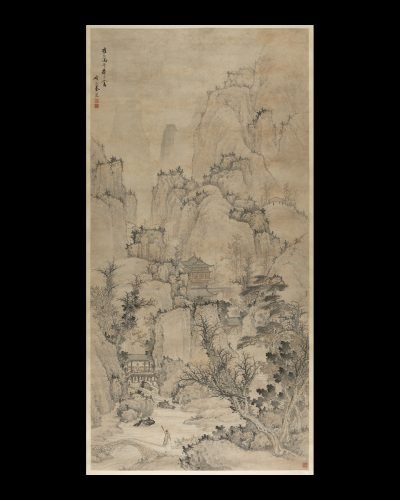 Inscription:
“Painted on a spring day during the year 1726 in the Yongzheng reign-era, Qin Lian, called Shiyu (‘Stone Fish’).”

In the foreground a traveler with staff crosses a bridge on his way to visit a friend who waits in a viewing pavilion built over a rushing stream. An extensive villa appears in the middle ground. Above rise serried peaks, the overlapping of which creates the illusion of recession in pictorial depth. The painting is an exercise in restraint in the intentional limitation of the range of ink-tonality, of texture, and of forms, to the point where simple changes take on significance and small variations are noteworthy. Although extremely sparse, the work does not appear sketchy but rather to be the essential structural framework remaining after a highly disciplined visual analysis and reduction of an originally complex image. This degree of simplification does yield the desired quality of blandness, of understatement, but does not interfere at all with perception of an implicit quality of richness.

The creator of this intriguing image was Qin Lian (paintings dated 1706-1726), born in Nanking and a direct pupil of Fan I, one of the major artists of the previous generation. Another influence was surely Zha Shibiao (1615-1698), an artist from Anhui who was active in Nanjing during Qin Lian’s lifetime (fig. 1). This sparely decorated, geometric mode was a feature of the Anhui school of painters and is presented in very admirable fashion in the present painting.