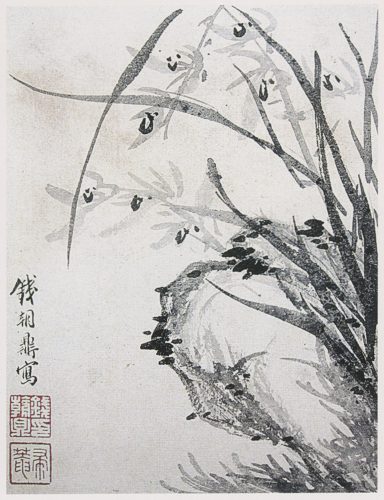 Colophon:
by Chikujiku Shujin stating the album had formerly been in the collection of Tosa Joshu Yodo-ko (Yamanouchi Yodo, 1827-1872).

Qian Chaoding, zi Shugu (‘millet valley’), was from Changshu in Jiangsu province, receiving a jinshi degree in 1647 and rising to the rank of Chief Minister at court, a major position during the early Qing period. Qian also distinguished himself as a painter whose extant works are dated between 1661 and 1671. “…He excelled in painting orchids, flowers, bamboo and rocks, learning his methods from Sun Kehong [1533-1611].”1 Qian’s style, indeed quite close to that of Sun, as evidenced by a comparison of existing works of the artists, was described as follows: “…The leaves of his orchids are hardy and robust, possessing great vigor, dense yet distinguishable; their blossoms are very complex but their placement is clear. People of today strive to buy them but only a very few are extant.”2 The present album, capturing the body and soul of the orchid, blooming from spring into early summer, possesses those recorded qualities and has come down to us in admirable condition.

Qian’s interest in cultural matters extended beyond his activity as a painter, evidenced by a visit to the site in Guangdong where the revered inkstone material, Duan stone, was mined. There, his discussion with scholars on the subject resulted in an essay, Shuikengshi ji, “Record of Mined Stone (from Duanzhou).” His collected literary works is entitled Shuikengshi ji, “Record of the House of Three Satisfactions.” It is recorded that he died at the age of sixty-six.