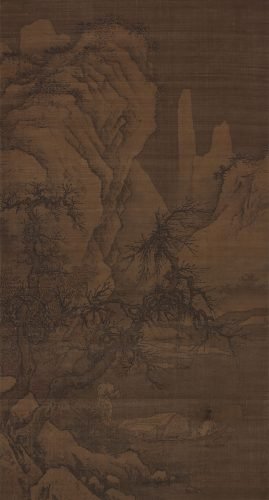 (See write up below.)

An interpolated inscription reading Meng-fu hsieh, purportedly the signature of Chao Meng-fu (1254-1322), was removed during remounting. The Hsueh-an seal of P’u-kuang, placed in the upper right corner, is legible under infra-red light (The Yuan master Yen Hui also applied his seals in the upper corner of the pair of Taoist paintings now in the Chion-in, Kyoto).

Some of the complexities surrounding the life and activities of the monk-artist P’u-kuang, whose hao was Hsueh-an, are manifested by the facts that the most recent dictionary of Chinese artists, the Chung-kuo Mei-shu-chia Jen-ming Tz’u-tien, provides the artist with no fewer than three separate listings while the more general biographical dictionary, the Chung-kuo Jen-ming Ta-tz’u-tien, records him twice. Part of the confusion derives from his use of two different characters for the P’u of his name, although both characters carry the same denotation of ‘universal, all-pervading.’ The artist is also known under his secular surname of Li as well as by an honorary Buddhist name, Hsuan-(or Yuan)-wu Ta-shih. A last complication derives from the fact that P’u-kuang was active in the north, under the Chin dynasty, and subsequently served the Yuan, which accounts for a temporal separation in some texts of one artist into two.

P’u-kuang was born in ‘Ta-t’ung, Shansi province, into the Li family. His name after becoming a priest was P’u-kuang, ‘All-encompassing Illumination,’ his tzu was Hsuan-hui, ‘Abstruse Obscurity,’ and his hao Hsueh-an, ‘Snowy Hut,’ and Hsuan-wu Ta-shih, ‘Great Master Who Comprehends Profound Doctrines.’ As a priest P’u-kuang followed the Ts’ao-hsi sect of Ch’an Buddhism founded by Hui-neng during the 8th century. His painting teacher is not recorded in any biography but he is said to have been influenced by the style of Wen-yen Shou (1172-1232), cousin to the Chin emperor and an important collector and painter. Already during his early years P’u-kuang had become known for his poetry, calligraphy, as well as painting, and it was those talents that brought him to the fore in Beijing after the establishment of the Yuan dynasty in 1279.

It is reported that the writing style of a wine-shop sign written by P’u-kuang caught the eye of the famous official and artist Chao Meng-fu (1254-1322), who, after studying it for a long while, commented: ‘It is said that no other calligrapher of today comes up to me but this writing surpasses mine.’ P’u-kuang was then recommended for court service by Chao and rose to become head of the Dhuta sect of Buddhism and an academician in the Chao-wen Academy. P’u-kuang was also given the Buddhist title Hsuan-wu Ta-shih, a name which appears on a calligraphy handscroll now in the Shanghai Museum. P’u-kuang’s position in the Chao-wen Academy made obvious use of his writing skills, and all the building signs used throughout the Forbidden City at that time were said to have been written by this imperially-favored calligrapher.

Although very few of P’u-kuang’s paintings have survived to modern times, the nature of some of his landscape paintings is indicated by the recorded titles of some of them: ‘Snowy Mountains,’ ‘Mountain Mist,’ ‘Buddhist Monastery by River in Mountains,’ ‘Pine-covered Peaks in the Chiu-hua Mountains,’ ‘Small Wintery Grove,’ and ‘Wind in Pines on Myriad Peaks.’ The images evoked by those titles are largely related to the northern landscapes styles emanating from such early Sung masters as Li Ch’eng, Kuo Hsi, Fan K’uan, and Li Tang, and those are of course the styles that had remained in fashion in the north during the Chin dynasty under which P’u-kuang was born.

During the Yuan dynasty other artists took up the challenges posed by that tradition of monumental landscape painting, although their creations are known today mainly through anonymous works dated only with difficulty. The present ‘Searching for Plum Blossoms’ also makes extensive use of the reserve technique, allowing the natural color of the unpainted silk to stand for snow-covered forms, and this is found commonly in Yuan paintings, even those by such literati masters as Huang Kung-wang (1269-1354). Huang’s ‘Nine Peaks after Snowfall’ done in 1349 can in fact be regarded as his creative transformation of such more pictorial compositions as that by P’u-kuang. Comparison of the present painting with one by Tai Chin (1388-1462) suggests that Yuan paintings by such conservative masters as P’u-kuang formed part of the stylistic context out of which emerged the Ming dynasty Che School. P’u-kuang’s painting is thus historically significant as well as pleasing in its own terms, manifesting both the naturalistic intent of Sung masters as well as the more formal concerns of Yuan and later artists.