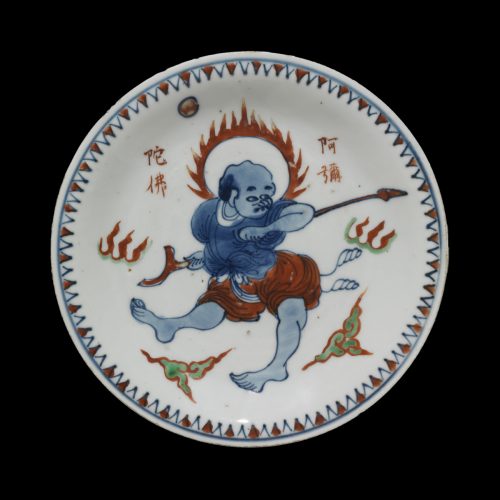 The dish was potted with thin walls, is light in weight, rather delicate, and decorated in the center with a lively blue-skinned lohan, dramatically postured, gripping a crutch, kicking his bare foot up while looking back over his raised arm. His loose garb consists of a baggy underglaze-blue top and short pantaloons in iron-red hiked up with sashes flying behind. A stunning red halo surrounded in flames encircles the figure’s head while further flames along with trefoil clouds, all in red and green enamels, float in the background. Written in red enamel to the right of the halo are the characters ami, and to the left tuofo, together reading “Amida Buddha.” A red and white saw-tooth border encircles the rim while an apocryphal four-character mark reading Chenghua nianzhi (“Made in the Chenghua [reign] years”) is inscribed on the base in underglaze blue. Flakes of glaze have pulled away from the lip rim, the appearance of this ragged edge known affectionately in Japan as mushikui, “insect nibbled mouth,” typical of this type of ware.

Humor, whimsy and wit are not words normally associated with Chinese ceramics. But the early 17th century, when this very special group of wares was produced, was not a normal time. The Japanese market was a welcome solution to the Chinese need for business and their potters more than willing to turn themselves inside out to gain favor. And that’s what they had to do to satisfy the unusual tastes of their Japanese clients. The present dish is an example of the colorful ko-akae(“old red painted style”) polychrome enameled porcelains produced at this time, partners of similar underglaze-blue decorated wares, ko-sometsuke (“old blue-patterned style”) made for the Japanese. These wares were so specifically crafted for this market that today they are referred to by their Japanese names.

It might also be noted that the figure on the present dish has been identified as a lohan, a disciple of the Buddha, suggested both by his demeanor and by the characters, “Amida Buddha,” written beside him. However, he could just as well be the Daoist immortal Li Tieguai, suggested by the crutch which is Li’s main attribute. To the designer and painter of these wares during the late Ming the point was to create lively and attractive decoration with little concern for accurate symbolism, just as the Chenghua mark on the bottom of the dish was not intended to suggest a date for the dish but was rather an ornamental addition.

The concept of migration is particularly relevant here. An idea in Japan—a quite sophisticated one developed within the world of tea—travels to China, a source of wondrous porcelain wares, enters the agenda at kilns located in Jingdezhen where the porcelains are produced according to order and by way of the flexibility and inventiveness of the Chinese potters. The products are then sent to Japan where they are used in tea gatherings among the elite and enter into various collections. At some point in recent times they gain the attention of scholars and collectors in the West, some of whom are thrilled to acquire this off-beat ware and take it to Europe or the USA. The final stage in the migration of these porcelains is their return to China, the homeland, where in most recent times an understanding of these eccentric wares in the history of Chinese ceramics is recognized at last.