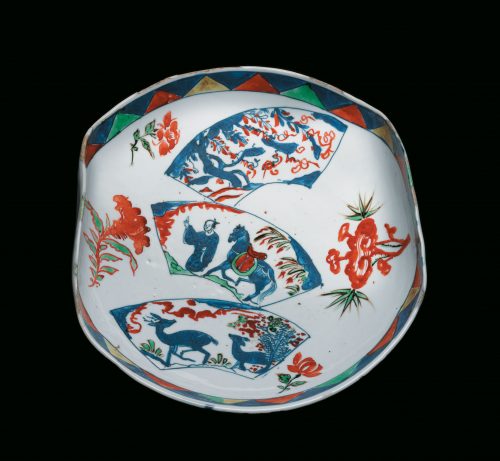 Thrown on a wheel as a circular dish, the piece was then decorated with underglaze-blue and polychrome overglaze enamels and then gently pushed in from each side before it was fired to achieve the unique shape. Three fan vignettes decorate the inside, each defined by a fine blue outline and placed carefully to appear as if they had landed randomly on the white porcelain ground. One fan is painted with a tree in blue laden with red vines and tendrils that meander calligraphically to fill the space within the fan, the second with a robed figure on foot and his saddled horse with red, green and blue landscape elements surrounding them, and the last fan with a buck and a doe in a landscape with a tree off to one side, grasses sprouting from below and red clouds ribboning above. The white space remaining on the interior is painted with a coxcomb on the left across from a lingzhi fungus with an additional floral stem placed above each. A cheerful pattern of green, red and yellow triangles on a blue band encircles the rim. On the underside is an explosion of blue and red chrysanthemum petals radiating from the wide unglazed and stepped foot. The overglaze-enamel colors are a matte tomato red that is applied in a painterly fashion, a clear glassy green that is painted within either black or red outlines, and mustard yellow confined to the rim. The paste is remarkably smooth and refined considering the typically pitted surface of the porcelain exposed on the unglazed base and foot where kiln grit adheres. The glaze has some blemishes but is otherwise clear and bright.

The feeling one experiences when picking up this dish by its furled edges is so completely natural that one believes that all dishes should be made like this. Probably only a precious few were. They include a number of examples produced in China for the Japanese market during the early 17th century but these with a single side pushed or furled inward. A kosometsuke dish with a dramatically collapsed side (fig. 1) strikes us as wildly extreme in comparison to two vessels, one used as a brushwasher decorated with a boldly painted phoenix motif in the center (fig. 2) and the other with a pattern of decorative roundels painted in underglaze-blue and overglaze red, green and yellow enamels like the present dish (figs. 3-4).
These are considered extraordinary pieces. They are daring and bold and resulted from the Chinese who made them responding to a taste and fashion that was not their own. A market that wanted wares that ‘appeared’ imperfect, that shunned symmetry and regularity but instead considered ceramics perfect only if they were asymmetrical and irregular? Unimaginable. A market that appreciated the f laws in a glaze to such a degree that poetic terms were conjured for these f laws—the ‘insect eaten rims’ to describe areas where the glaze has chipped away? Nonsense! In China, when a piece emerged from a kiln distorted, it was tossed on a junk heap. Such a piece to the Japanese was admired and loved because of its distor tion. The aberration was part of its individuality and comprised much of its charm. The furling of two sides of a dish, not just one, suggests that a Chinese potter took what he considered a hideous sight—in his hands an unbalanced dish where he had just pushed in one side according to the client’s wish—and gave the client twice as much by pushing in the opposite side too, but the Chinese potter had also reintroduced a symmetry that he himself could live with. It was a strange time.

The aesthetic precepts promoted by the Japanese tea master Furuta Oribe (A.D. 1544-1615) added to the crucial foundation begun by his predecessors to make the intentional deformities produced by the Chinese potters possible, and the ceramic ware named after Oribe was the perfect embodiment of his aesthetic sense (fig. 5). Transferring the aesthetic—the natural, rough, imperfect—from the world of old agrarian Japanese stonewares where Oribe found it to the world of Momoyama-early Edo period tea aesthetes who embraced it and then into the world of the Chinese potter where it was given a new form is a long and dramatic story, and the present piece represents its conclusion.

In addition to the basic aesthetic and the models for ceramic shapes, the Japanese provided inspiration for design through the paintings and textiles popular among the elite during the 16th and early 17th century A.D., as for example the use of the popular folding fan as a decorative motif, seen here in a textile design from the early 17th century A .D. (fig. 6). The specific composition and motifs on the present multi- coloured dish here appear to have been popular ones also in kosometsuke wares (fig. 7). It is likely that the blue-and-white preceded the overglaze- enamel renditions of the theme and that leap into a more lively and colorful world suggests how adventuresome and open-minded the Japanese clients must have been. 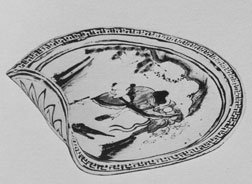 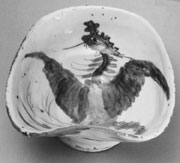 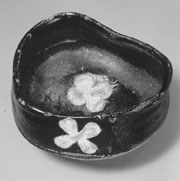 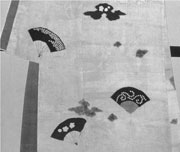 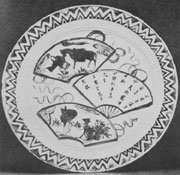