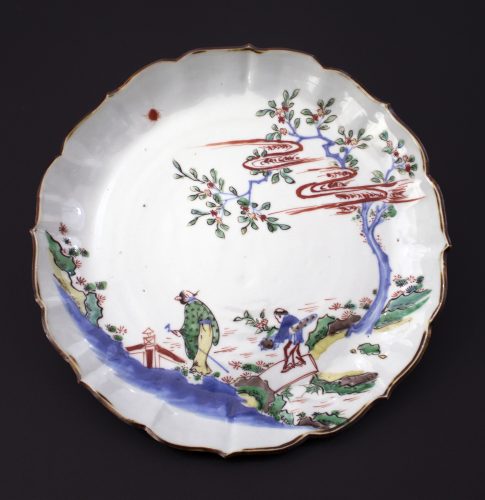 The magnetism of the Chinese scholar exerted a power beyond China’s borders, as seen in the decoration of porcelains intended for the Japanese market. The idealized gentlemen here strolls through a rarefied world of glistening enamels, gazing at the moon, his servant bringing up his qin, “lute,” all within the eight bracket-lobed foliations of the shallow porcelain dish.

The overglazed-enamelled porcelains produced in Jingdezhen during the late Ming period for the Japanese were called ko-akae or “old red-decorated” wares, the close relatives of ko-sometsuke, “old blue style” wares. The core products were crafted to be rough and sturdy, often asymmetrical in form and sometimes purposefully misshapen, with brittle glazes leading to chipped or “insect-nibbled” rims, all contributing to the feeling of naturalness and spontaneity praiseworthy in Japanese tea circles.

Here the greater regularity and delicacy of shape and the coating of the mouth rim in a protective brown glaze exhibit qualities that would have made such a ceramic suitable for a more widespread market than the hardcore tea ceremony wares for Japan. The brushwork is also quite careful and controlled. Note the precisely drawn red outlines and meticulous addition of the enamel colors, or details very studiously brushed in black enamel, and even the subtle stippling around the sun to indicate its sparkling rays. A number of similar pieces are marked with the same rather rarely encountered mark, Tianxia taiping, “Great peace under heaven,” on their bases, a number of which might well have formed a set (fig. 1). 1 The porcelains with such marks are usually ascribed to the Chongzhen reign era, at the very end of the Ming period, likely due to the improved quality of the wares exhibiting an evolution of taste among Japanese tea masters. Though produced in sets for Japanese use during the meals accompanying tea ceremonies, an insightful Chinese individual, one who might identify with the scholar depicted on the dish, would also have found such a piece quite engaging.

1. Another piece with the Tianxia taiping mark, in similar underglaze seal-script in a square on the base, is a bowl decorated with scholar seated at a table on the exterior and a rim washed with brown as in the present example. See Sir Michael Butler, Margaret Medley and Stephen Little, Seventeenth Century Chinese Porcelain from the Butler Family Collection, Alexandria, VA., 1990, no. 34, pp. 72-73. 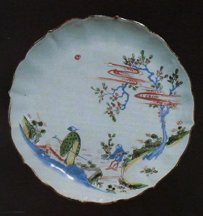