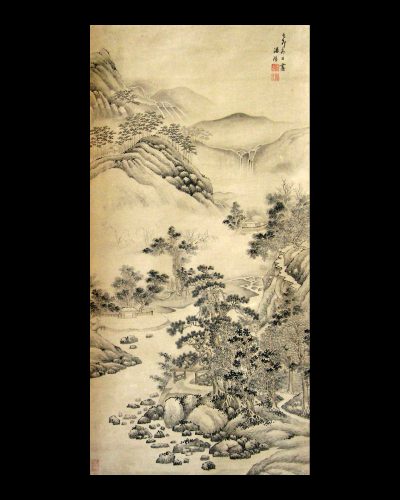 Inscription:
“Painted on a winter day during the year 1639 by Pan Cheng.”

Waterways cascade down the distant mountains to be gathered into a river that runs through a valley with houses and paths along its banks. Particular attention was paid to the creation of patterns in the groves of trees, in their foliage, and in the structure of the hills. These textures visually activate the surface of the painting, creating interest in a scene devoid of narrative, save for the single figure with staff who makes his way up the winding path. Done in ink alone, the painting is yet rich with the pleasures of ink and brush.

Born in Suzhou, Jiangsu province, Pan Cheng followed such earlier master in the Suzhou tradition as Shen Zhou and Liu Jue. Pan was a worthy successor to that tradition and it is unfortunate that so few of his paintings survived into modern times.