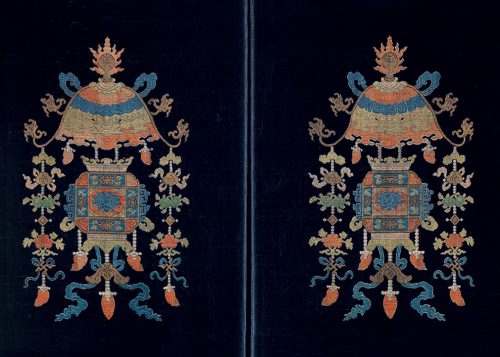 Made for use during the Lantern Festival, each deep navy blue silk panel is woven with a design of a large lantern in red, blue, green, yellow and gold silk threads. Each lantern is decorated with a central lotus surrounded by four floral motifs between foliate brackets on the sides and surmounted by crown-like fixtures. Three beaded tassels are pendant beneath the lantern, the center one suspending a be-ribboned ruyi-chime motif. A colorful canopy is suspended above the lantern surmounted by a flaming pearl and flanked by furled sashes and golden hooks, each with two golden dragon projectiles. The hooks suspend elaborate beaded chains that are hung with auspicious objects including chimes, ruyi, peaches, peony, and a ribboned wan symbol and terminate in a tassel.

While this exhibition is titled “The Immortal Past,” in the case of these lantern brocades, the pair could be considered as current today as when they were made three-hundred years ago. The Lantern Festival is a celebration marking the end of the Chinese New Year and dates back to the Western Han period. This year, 2014, the Festival began on February 14. In China people still hang and carry lanterns and the government sets up large-scale lantern displays at this auspicious time. The present lantern brocades were most likely made as household furnishings for the festival days. According to John Vollmer, “Cushions or hangings decorated with lanterns were hung to mark the 15th day and lanterns were lit to guide the souls of the ancestors back to the realm of the dead.”[1] A comparable piece is a Ming brocade fragment of a slightly earlier date woven with boys and lanterns (later made into a sutra cover) that would also have been part of the decoration for household furnishing for the festivities (fig. 1).

During the Ming period, the elite had special costumes made for celebrations that were decorated with auspicious emblems to commemorate the particular festival day. Although most of the robes have not survived, a fragment of a longpao, or dragon robe, from the Mactaggart collection and now in the University of Alberta Museum, is richly embroidered with colorful lanterns amid the essential dragons and was undoubtedly made for a lantern festival during the Wanli period (A.D. 1573-1619) (figs. 2-3).

One reason for the surge in festival paraphernalia during the Ming dynasty, according to Valery Garrett, was that the Mongols had suppressed the traditional Chinese festival days during the preceding Yuan dynasty.[2] Garrett also notes that during the late Ming period such festivals were seen as a “relaxing diversion” by the beleaguered Ming officials under threat from the Manchus advancing from the north.[3] A beautifully preserved Wanli imperial badge with the central lantern flanked by dragons clutching pearls embroidered on silk gauze illustrates the special care taken by the Imperial Household for the Lantern Festival (fig. 4). 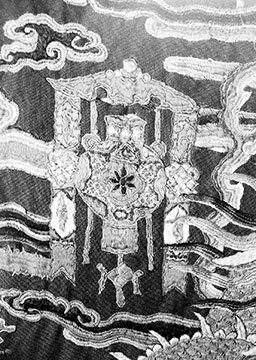 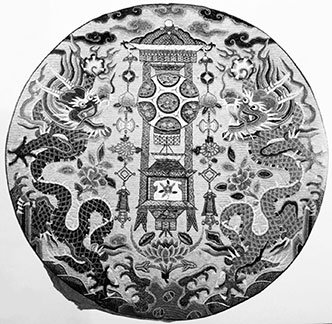