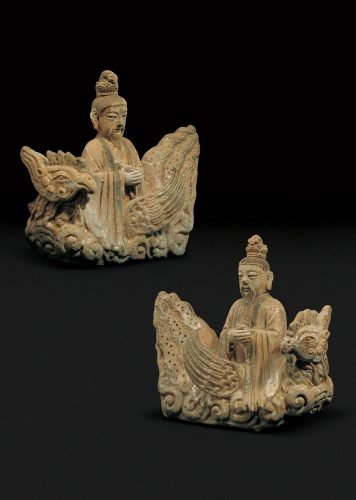 Each human form is seated on the back of a phoenix, the figures ceremoniously straight-backed and taut, each bird settled on a nest of its own cloud-like feathers, and both figures and their mounts facing solemnly forward. The figures have long beards trimmed carefully to points with long mustaches that droop onto their beards. Each face, while characterized by large elongated eyes and heavy lids, tightly closed mouth, broad nose, and fleshy ears with thickened, somewhat elongated lobes, is yet highly individualized by means of distinctive facial shapes, one more oval and plump, the other thinner with pointed chin, and by their individualized mouths. Each is coiffed similarly with thick, smooth hair capping the skull and supporting a high crown. Their attire consists of long sleeved cloaks opened down the front revealing thinner undergarments, the sleeves draping low over the birds and the hands held rigidly in front of each body presumably to hold tablets. Each phoenix is strongly modeled with elaborate plumage, the wings swept back, thick wavy tail feathers held high, crests atop their heads high and jagged, the large beaks distinctively hooked, and plumes streaming from their heads. The robust sculpting and dynamic lines and details of the birds contrast strongly with the stiff postures, regular contours, and staid details of the male figures. Traces of silvery green glaze are evident as well as some remnants of pigments that were used to enhance the forms or produce highlights and details, the sculptures mold pressed and detailed by hand.

The tactile sculpting, surfaces which are dramatic and expressionistic, the engaging, almost medieval (in a Western sense), flavor of the objets, and the robust rather than refined character of the works are typical of one line of sculptural products of Yuan-dynasty craftsmen. Among the imaginative creations of the period are sets of zodiacal figures, produced in Yunnan province, to which the present relate on both technological and aesthetic grounds (fig. 1).

The gentlemen before us, however, are Daoist savants, recognizable by their distinctive beards, formal dress, and Daoist priest caps in the form of petal-ringed crowns with high central tufts. Their regal avian companions suggest they’ve likely entered the realm of the immortals. Since time immemorial in Chinese lore, immortals ruled the skies and the Queen Mother of the West is often depicted coming in for a landing aboard her spectacular phoenix. The roosting birds here are more like feathery thrones than vehicles, and the Daoist figures are at rest rather than ready to ride. Although it would have been their station to provide a conduit between earthly and heavenly affairs, the figures here are also reminiscent of attendants of Laozi, the historical founder of Daoism and the god-head of the faith. The first recipients of Laozi’s revelations were Yin Xi and Zhang Ling, both historic personages who were later immortalized or deified, and who, it has been argued, appear in the sculptural arts of the Daoist faith.[1] We might here be in the presence of their sacred images.

1. See Stephen Little, Taoism and the Arts of China, Art Institute of Chicago, 2000, pp. 167-168, for the identification of the images. According to Dr. Little, “The figures are significant because these were the first human beings to receive revelations from Laozi. It was to Yin Xi that Laozi first transmitted the Daode jing, while Zhang Ling (Zhang Daoling) was the first human being toexperience a vision of the deified Laozi.” 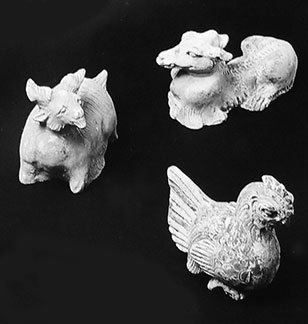