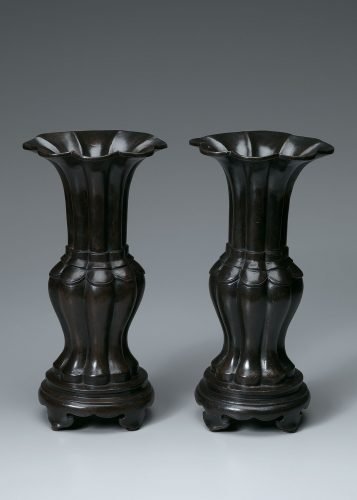 Each vase was cast with eight lobes, the tall necks terminating in everted octafoil mouth rims, the bases similarly eight-lobed and raised on stepped circular plinths, each supported on three ruyi form feet imitating the form of a wooden stand. A horizontal band cinches each vessel at the base of the neck while the lobes of the vessels are cast with pendant petals in raised relief, all enhancing the strong profiles. The bronze vases are heavy and the patinas smooth in texture and dark brown in color.

The ancient inspirations and prompts—the bronze gu or zun from millennia past, or the celadon baluster vases and lobed foliate bottles and vases of more recent vintage (the 12-14th centuries)—have been totally absorbed and transformed in the fashioning of these handsome vessels. The ne w shapes have taken on an exquisitely organic feeling with their scintillating profiles, floral mouths, and swelling curves. Along with seductive and sensuous surfaces and soft color, they exist in a new world.

The Chinese of the Qing period (A.D. 1644-1911) loved receptacles they could use as vases for a plum branch or wild grasses or spring blossoms, or as convenient places at hand to put a brush, a back-scratcher or even incense sticks. Paintings from the period suggest that the preferred forms were beakers, particularly the gu and the zun that originated in Bronze Age China.1 Easily at hand were archaistic imitations of these antique ritual vessels and they were produced in a variety of forms. Proportions were changed, a neck shortened, a mouth dramatically splayed. Many were created by bronze artists who sometimes signed their wares, indicating how fashionable these items were. While these craftsmen often embellished their wares with decorative motifs that also harkened back to the ancient bronze models, more up-to-date versions depended purely on shape and the monochromatic power of the dark bronze surfaces to establish their attractive and commanding presences. Such vases as the present can be considered, in fact, bronze counterparts of the monochromatic porcelains that were also the rage of the day, porcelains such as the cafe-au-lait browns which need offer nothing but a shape and a glaze to be successful.2 Bronze casters, like their counterparts at the ceramic kilns, were kept busy at their craft supplying an appreciative market that ranged from the scholars, officials, and the nobility of Beijing and other great cities to the merchants of Yangzhou.

1. One need only peruse James Cahill’s excellent study, Pictures for Use and Pleasure: Vernacular Painting in High Qing China (Berkeley, Los Angeles and London, 2010) for numerous paintings in which various gu and zun vases—their brown colors suggesting they are bronzes—can be seen gracing interiors and garden settings. Also see Jonathon Hay (Sensuous Surfaces: The Decorative Object in Early Modern China, Honolulu, 2010) for similar images reflecting the immense popularity of this vessel type among affluent Chinese during the Qing dynasty.