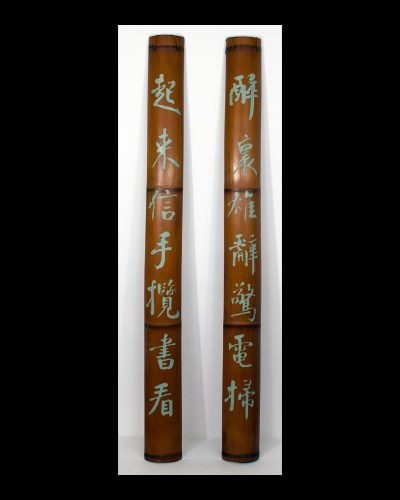 Inscribed: 銘:
(Right) (右)
“For the refined judgement of Shouquan,
my esteemed second elder brother:
寿泉二兄大人雅正
In drunkenness my strength takes leave
and I start at strikes of lightening.”
醉裏雄辭驚電掃

(Left) (左)
“On awakening I stretch out my hand
to look at my calligraphy.
起来信手攬書看
By younger brother, Weng Tonghe [1830-1904)
弟翁同龢

The two lengths of bamboo, each one-third of a circular, hollow stalk, and each pierced on one end for hanging, are in the form of the much shorter wrist or arm rests used by calligraphers to steady their hands while writing. Each of the two curved surfaces is carved in intaglio with seven characters forming a fourteen-character couplet infilled with pale green pigment that provides a contrast to the smooth, fine-grained, warm amber color and glistening surface of the bamboo. Four horizontal nodes divide the characters written on the internodes of each stalk. On the upper right of the right-hand stalk are eight small characters reading “For the refined judgment of Shouquan, my esteemed second elder brother,” and on the lower left of the left stalk is a four-character inscription by the one responsible for the couplet: “By your younger brother, Weng Tonghe.” This inscription is followed by two seals, one illegible and the second a two-character seal reading “Shuping.”

The author of the couplet was a prominent Confucian scholar of the late Qing period. Weng Tonghe (1830–1904), hao Shuping, was a notable tutor for the imperial family, to the Tongzhi emperor himself, as well as a high-ranking official. One of his descendants, a great great grandson, lives among us as an accomplished and illustrious literatus himself, and an individual who is greatly admired and dearly loved by all in the international circle of scholars and collectors devoted to Chinese art and culture.

In drunkenness my strength takes leave
and I start at strikes of lightening.

On awakening I stretch out my hand
to look at my calligraphy.

The couplet is a poetic form with long-established regulations and norms specifying numbers of characters per line, rhyming patterns, coordination of parts of speech between lines, lexical and tonal patterns, and meaning. Couplets usually written on paper and hung beside gates or doorways and, for example, on pillars, were popular methods for wishing good fortune, for celebrating a season or special event, or for driving out evil spirits. The spirit of the Confucian family, however, is indicated here by the nature and tone of the dedication and the world of the scholar/official evoked in the couplet where wine and writing are the primary connotations.