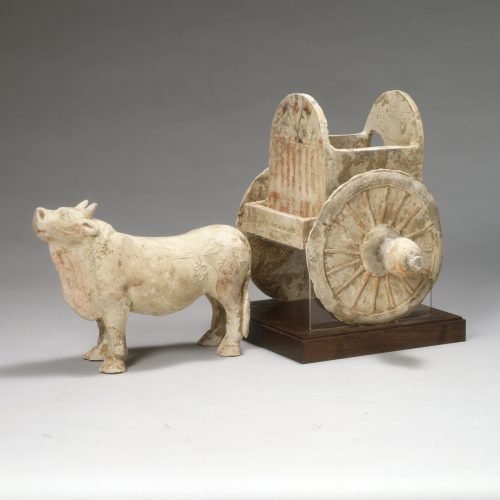 Standing foursquare with head raised, the hollow-molded ox is posed to pull the large-wheeled cart behind, both a refined, buff-coloured earthenware with added red, black and white pigments still apparent. The ox is modelled with sweet face, short horns, gentle hump, pronounced dewlap, its long tail swishing across one hind leg. The trappings across the back were produced in very delicate raised relief with palmette-shaped pendants on the sides. The cart was constructed with a flat platform enclosed by straight sides and arch-shaped front and back with seating trough for the driver in front and a doorway in back. Vertical slats are painted in red in front with a floral design in multicolor pigments—red, black and white—on the sides of the cart. The separately modelled wheels have spokes in raised relief reinforced with red pigment and prominent hubcaps also enhanced in red.

The oxcart was a means of transport, along with horse carts and carriages, and might represent either a working farm animal and vehicle or members of a funerary entourage. From the Han through the Tang period, oxcarts are depicted not only in ceramic for inclusion in burials as mingqi, “spirit objects,” but in tomb wall paintings as well. An early Tang date for the present is suggested by the cart’s construction– opened above but closed on the sides as well as the modelling of the ox, a dating supported by early Tang tomb finds in, for example, Dingxian, Xinxiang, and Shouxian in Hebei province.[1] These early Tang figures are either coated with a pale, straw-colored glaze or, as in the present case, embellished with colored pigments.[2] Another example with both ox and cart most similar to the present is in New York City’s Metropolitan Museum of Art.[3]

2. Both are represented in the Tokyo National Museum and illustrated in the Osaka Municipal Art Museum exhibition catalogue, Zuito no Bijutsu, 1977, one virtually identical to the present example (fig. 1-248), and the other with straw glaze (fig.1-249).