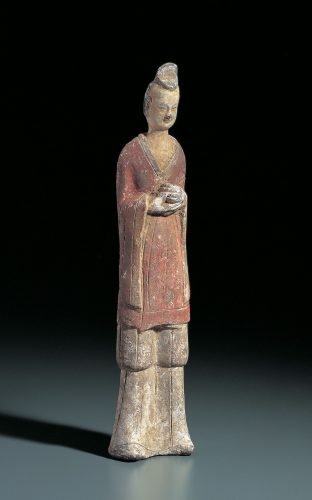 The elegant and slender figure stands with his head slightly bowed, his left hand enclosing an aperture intended for a standard, the right hand with long fingers cupped below for added support. The body is attenuated and the head relatively small with the face characterized by delicately delineated eyes beneath high arched brows, a small triangular nose, and a tiny mouth with lips formed into a gentle smile. The ears are carefully depicted and an official cap sits on the head. The figure wears a short red robe wrapped around the front to form a low “V” shaped neckline, and below a belted waist are loose pantaloons gathered at the knees. The borders on the neck and deep sleeves as well as the folds of the garments are rendered with incised lines. The figure is solid and quite flat on the back although finished with some vague modeling and further incised lines. The grey earthenware retains much of the original pigment: red on the robe, white on the pantaloons and the hands, chest, and face of the figure, with black for the hair and cap, with facial details highlighted sparingly in red and black.

The present figure is comparable to those discovered in Northern Wei dynasty tombs as illustrated here by examples from the early 6th century in Henan province (figs. 1-5). Among the published examples outside of China today are two in the Osaka Municipal Museum of Art and another from a Japanese collection that was sold at auction in March of 2013.[1] The distinctive sculptural style of these figures was created by the end of the 5th century when the Turkic Xianbei dynasts moved their capital to the old city of Luoyang in Henan and continued to be the predominant figural style in their arts until the end of their rule in A.D. 534.

Expressionistic attenuation along with flattening of forms, the patternization and geometricized facial details and especially the clothing of the figures, as well as unnaturalistic proportions, are the special features also characterizing figures depicted in the Buddhist sculpture, pictorial engravings, and paintings of the period. The Northern Wei style exists in a world of its own, a reality separate from the art of the Han period that preceded it (save for the sweet smiles reminiscent of late Han Sichuanese sculpture) and separate from that which followed (aside from lingerings of the style during the Eastern Wei). It is rather intriguing that these most exquisite, refined, and even spiritual of images were made under a dynasty which was, in the eyes of the Chinese, that of barbarians. 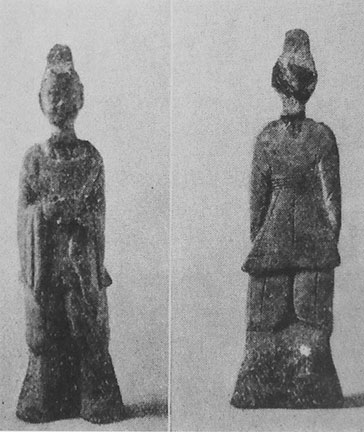