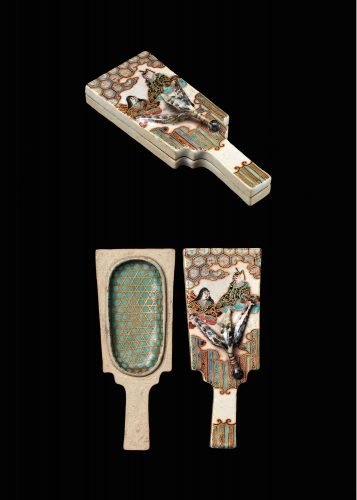 The incense holder is made in the form of a hagoita, a traditional Japanese badminton battledore or racket. The cover is very finely enamelled with male and female courtiers garbed and coiffed in a manner reviving Fujiwara-period fashion —he with a handsome updo and she with long, flowing, straight tresses, both with wide-sleeved, voluminous, multilayered kimono, while the composition is also based on ancient emakimono or handscoll models. Rich brocade is suggested in the diaper pattern above the figures and a decorative stripe below. A shuttlecock serves as the grip or handle for lifting the lid. The interiors of the receptacle and lid have recessed oval depressions enameled with gold intersecting lines forming a hexagonal string pattern on a turquoise ground. The enamels are for the most part applied over a milky colorless glaze that is lightly crackled, whereas the shuttlecock appears to have been painted with enamel colors before the application of the glaze. The base of the holder has some evidence of lightly brushed clear glaze and an impressed seal reading “Ninsei.” The light buff-colored, refined stoneware body has burned orange in the exposed areas.

Ninsei set up his kiln in northwest Kyoto on the grounds of Ninna-ji (his name created from the first syllable of the temple name and from his own given name, Seisuke). Remains from the kiln site include an incense container shaped like the present, complete with Ninsei’s impressed seal, illustrated here next to the base of the present kogo (figs. 1-3). An intact example with a Fujiwara-style design like the present is among Ninsei’s wide-ranging oeuvre crafted from refined stoneware clay that fired light buff in color and is characterized by a relatively soft feeling, strikingly different technically and aesthetically from traditional overglaze enameled porcelain (fig. 4). Along with technical and artistic innovation Ninsei emphasized elements of contemporary cultural interest and fashion. Shuttlecock, or badminton, was a favorite New Year’s season pastime, especially among women of high society, and the subject was depicted by Japanese painters over the centuries [see cat. 25].

The beginning of Ninsei’s activity in Kyoto coincided with the death of the tea master Kobori Enshū (A.D.1579-1647), the tea savant who was responsible for broadening the world of tea, making it more catholic, deeming acceptable all variety of implements, accoutrements, and adornments including even novelties from Europe. The world of tea he opened up embraced the extremes of rusticity and refinement. Ninsei’s ceramic oeuvre was also comprehensive and inclusive from rustic Korean and Seto-style teabowls to his dazzling tea leaf jars of monumental size to tiny jewel-like objets and containers such as the present kogo, contributing to the birth kyō-yaki. ”Kyoto ceramics.”

Fig. 2: The base of the present kogo

Fig. 3: Impressed seal on the base of the present kogo reading “Ninsei”. 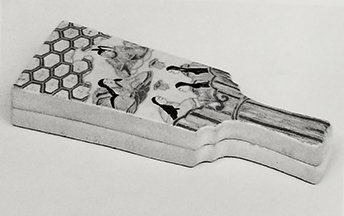