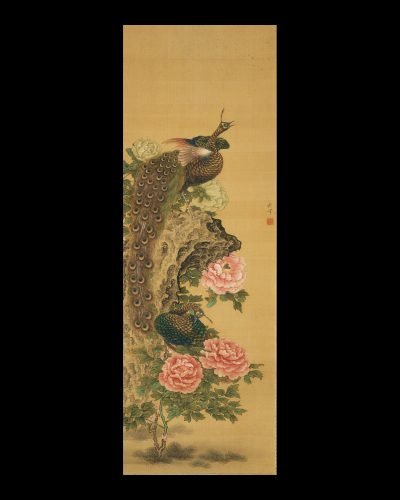 Perched high on a garden rock, a peacock raises his head to call for his mate, who waits shyly below, hidden within the blossoming peony bush. During the mating ritual, the male peacock spreads wide his tail feathers, and he is also said to dance when a beautiful female appears, that beauty symbolized by the peonies, the King of Flowers in its native China, associated with imperial associations already in the Sui and Tang period when the flowers were cultivated in the palace gardens. Peacocks and peonies were often combined in paintings for their overlapping symbolic connotations, symbols of culture, wealth and honor– but surely also because of the opportunity they afforded any artist for the display of consummate technique in creating images of great decorative beauty.

Okamoto Shūki was born in Edo. He was influenced and possibly studied with Watanabe Kazan (1793-1841), a painter who was a pioneer in Western perspective. Shūki’s earliest known work is a “Peacock and Peony” dated 1831. He said that he concentrated on flower and bird painting because he had not time enough to travel in the mountains and learn to paint landscapes, and he could not do figure painting because he lacked leisure enough to study the various occupations and traditions necessary for that type of painting. What Shūki did have time for was to study very closely the various kinds of flowers and birds, especially peacocks first hand, that formed his painting repertoire.