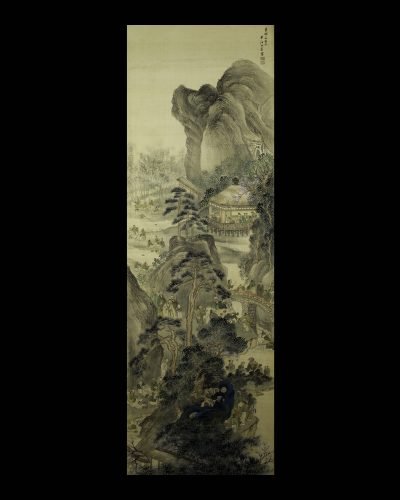 “Gathering at the Orchid Pavilion” 蘭亭集

Box inscription:
“In 1912 by the recluse Chikuka, comparing this painting to the 11th century ‘Elegant Gathering in the Western Garden’ painted by Li Gonglin.”

The ground plane of the riverside scene is tipped up sharply so as to allow clear sight of the numerous figures arrange in three major locations: foreground with house at the base of a tall tree; middle ground with bridge crossing the river; and far ground with pavilion and bamboo grove at the foot of high peaks. The scholars and their attendants crowd together in convivial groups, talking, laughing, drinking wine, and enjoying all the other scholarly pursuits.

The distinctive configuration of the painting—scholars ranged on either side of a stream, and with great prominence given over to a figure writing in the pavilion–identifies the scene as the Lanting Gathering, with Wang Xizhi (303?-361?) writing a preface for the poems composed and gathered on that day. In the year 353 a Spring Purification Ceremony was held at Lanting, Kuaiji prefecture (modern Shaoxing, Zhejiang province,) where Wang was serving as governor. Forty-two literati gathered along the banks of the stream and engaged in a drinking contest: cups of wine were floated from above, and whenever a cup touched the bank, the nearest guest had to compose a poem on the spot or drink the cup as a penalty. In the event, a total of twenty-six scholars composed thirty-seven poems, suggesting that not a few of the participants enjoyed more that a few cups of wine. The preface to those poems, composed by Wang on the spot, and inspired by the moment, was perfection in itself, a piece of calligraphy that established a new standard of excellence. In like fashion the gathering came to symbolize the heart of the literati enterprise, and gave rise to innumerable recreations of the event in actual and pictorial form in both China and, as here, in Japan. Painting the subject, and subsequent display of it, comprised a cultural ritual, reaffirming the value of convivial companionship and inspired creativity.