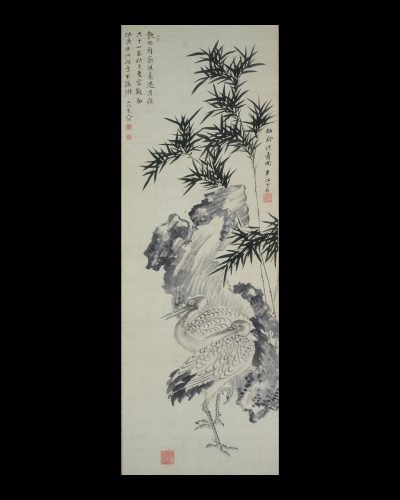 “Cranes by Bamboo and Rock”
巖竹雙鶴圖

Inscription: “A wish for longevity from those with immortal years (i.e. the crane).
Painted by Hankō Denshuku.”

Colophon by Shinozaki Shōchiku (1781-1851):
“Drinking and eating you take leave of your bamboo fence
travelling as your whim leads you,
You have rambled at leisure for sixty and
one springs and autumns;
You still have unrestrained spirit at home,
aided by secrets of the immortals,
Incessantly travelling to every which place,
But not to old China!

Box inscription: By Hirao Chikka (a disciple of Tanomura Chokunyū) in summer of 1906.

The colophon on the painting, written by a dear friend and admirer of the artist, suggests that Hanko painted this work to celebrate his 60th birthday. Hanko, son of Okada Beisanjin (1754-1820s), reached this point in his career after having grown up in an environment peopled by poets and artists, providing him access to a good education and appreciation of calligraphy and painting. He was, in fact, already painting by the age of 11 or 12 as evinced by extant works. Patronage played an important role in his life. Association with a wealthy shipping merchant, collector, and host to artists and collectors, accorded Hanko the rare privilege of unlimited access to the collection and the rare privilege to copy whatever he so wished. The trials and tribulations Hanko met with during his lifetime culminated in the destruction of his home during a revolt, which led Hanko to turn to painting as a means of sustenance more than during his earlier years.

The present painting reflects a very personal approach. A screen of black bamboo provides shelter and background for the rough and ragged rock produced with broad, staccato strokes of the brush which serves as a backdrop for the more delicately painted cranes, whose tail feathers, however, mirror the brushwork of the rocks.