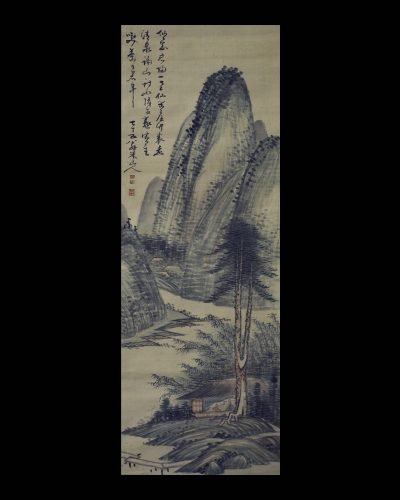 Inscription:
“A blue sky envelopes the misty trees, white clouds cover the bases of rocks;
The elegant guest sits with lute on his lap,
the mountains and water are his ‘knower of notes.’
Written and painted by Beisanjin at the age of seventy-five sai.”

Artist’s seals:
(Oka) da Koku; Shigen; Beisan; and one other

At the foot of towering mountains a group of literati gather to talk, drink tea, and listen to the koto. Two participants and attendants have already arrived while another with servant carrying the musical instrument approaches the gathering. A tall tree rises above the scene, dwarfing riverbank houses and extending up to a middle ground village. Following the stream to the far ground leads one to scattered houses, also situated in reference to the river. The compact mountain forms are organized in a vertical composition that fills the format, while each of those similarly shaped forms is structured internally by strong and curving brushstrokes. The visual impact of the whole is striking, compelling, as the abstract and formal elements of the picture engender tension with the narrative content.

Okada Beisanjin (1754-1820) was one of the major Japanese Nanga painters, along with Gyokudo (1745-1820) and Mokubei (1767-1833), who began to incorporate more Chinese elements into their paintings while maintaining a purely individualistic spirit. Although Beisanjin made his living as a rice merchant, he was well versed in Chinese literature and history and served the Todo clan in Osaka as a Confucian scholar. His son, Okada Hanko (1782-1846), thus grew up in an environment that gave him an appreciation of calligraphy and painting and allowed him to meet such literati luminaries as Tanomura Chikuden (1777-1835), Koishi Genshu, Shinozaki Santo, Gyokudo, and Rai San’yo (1780-1832).