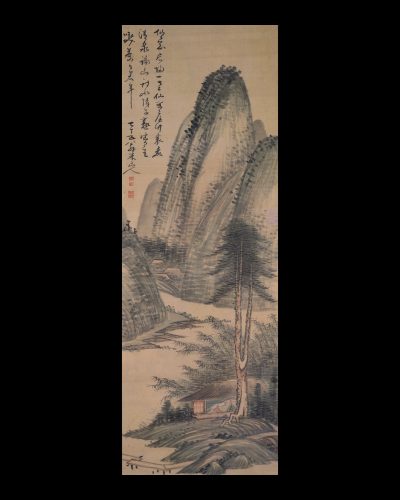 Artist’s inscription:
“In the immortal’s cottage, forgetting to return home,
is another old transcendent;
In the quiet room surrounded by bamboo
they boil pure spring water.
Discussing mountains while facing the water,
they respond warmly to one another;
Guest and host sip tea
and the day passes like a year.
The seventy-four-year old man, Beisanjjin.”

Okada Beisanjin (1754-1820) was one of the major Japanese Nanga painters, along with Gyokudo (1754-1820) and Mokubei (1767-1833) who began to incorporate more Chinee elements into their paintings while maintaining a purely individualist spirit. Here, the land and mountain masses are built up through layers of brushwork, a Chinese characteristic, while the space is arranged into an eccentric composition, a feature of much Japanese literati painting. In particular, the tall pine tree dwarfs the hut with two figures, while behind them the series of tall mountain shapes overlaps in an intriguing spatial recession.

Beisanjin’s son, Hanko (1782-1846), was also a fine Nanga painter who utilized horizontal “Mi dots” (a type of brush-stroke named after the Song literatus Mi Fu), but here Beisanjin dots the mountain in a lively and tonally irregular fashion, unlike the more fastidious manner of his son. A few sharply-angled lines, such as for the tree root and the spits of land in the middle left, contrast with the generally soft and rounded tone of most of the brushwork. The freely-brushed calligraphy of the poetic quatrain completes Beisanjin’s composition; we can imagine Beisanjin himself as the host, and the sympathetic viewer, even of today, as his guest.