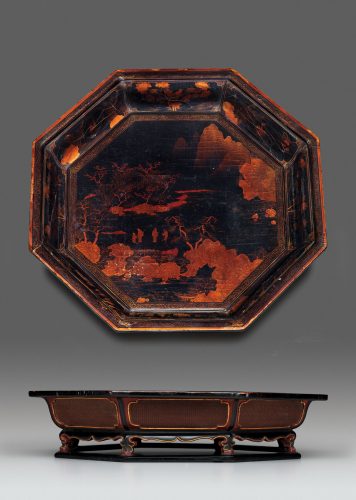 This exquisitely constructed and painted tray is so subtly done that to appreciate it fully, to see each detail of the painted design in particular, one would be best served by using a magnifying glass. That a complex shape, decorated in contrasting black, red and gold, and with basketry and decorative panels could yet be elegant and reserved was a great achievement, and was likely used by someone equally elegant, reserved, and, of course, privileged.

Each facet of the eight-sided tray, supported on multiple short cabriole legs connected by a stretcher, is pierced with a rectangular quatrefoil lined in gold and enclosing tightly woven basketry while on the interior the quatrefoils are painted and contain bird-and-flower vignettes. The bottom interior of the tray is painted in red lacquer over gold against the black ground, the scene comprised of a clearing in a mountainous riverscape with two long-robed scholars, each in conversation with an attendant, a boat moored in a rocky grotto below and an open-air hut in the background, the landscape rendered with sensitive painterly details and shading especially in the rockwork and mountains. The underside is covered in brown lacquer.

A number of dated pieces of related style indicate a date for the present tray during the early Qing period: one in a Hong Kong collection with a date corresponding to A.D.1720 (fig. 1). one with exquisite gold lacquer painting in the Field Museum of Chicago inscribed with a slightly later date, A.D.1726 (fig. 2) and a circular box with delicate polychrome painting on a black ground and a red-lacquered basketry exterior in the Minneapolis Museum of Art is dated earlier in the Qing dynasty, to A.D.1688.1 At the same time, comparisons to late Ming attributions, for example, a box in the Shōtō Museum in Tokyo (figs. 3-4) and another in the Anhui Provincial Museum, this octagonal tray with bird-and-flower subjects on the eight sections of the interior wall similar to the present (fig. 5), suggest that we keep an open mind about the date of manufacture of the piece. 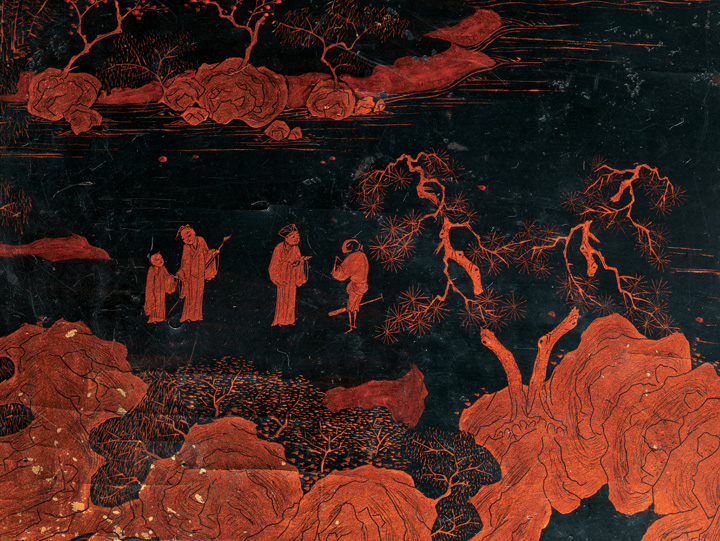 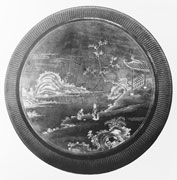