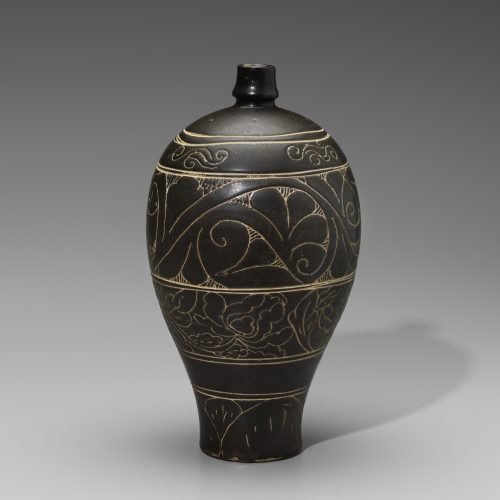 The ovoid body rises from a narrow base, ballooning dramatically in the upper body zone, the rounded shoulders terminating in a short constricted neck surmounted by a tall, incurved conical mouth. The bottle is covered overall with a smooth, dark-brown glaze that is incised with a wide central band of plump scrolling leaves on a striated ground above a band of four blossoms. Detached scrolls encircle the shoulder and rudimentary overlapping leaves ascend from the foot. The base is countersunk and covered with glaze.

This meiping is a product of the Ningxia region where kilns specializing in dark-glazed stonewares flourished under the Xixia dynasty, contemporaneous with the Northern Song period and later Liao and Jin dynasties. The large-scale motifs here and the linear style are rather unusual, standing apart from the bolder cut-glaze décor that is the norm, but not atypical of wares produced at the Lingwu kiln in Ningxia, as demonstrated from kilnsite shards (figs.1-2) and similar examples attributed to the kilns (fig. 3). The mere existence of these dark-glazed wares and that of the entirety of dark-glazed wares in the north and northwest can be traced to the 4th century innovations at the Yue kilns in Zhejiang province and the migration outward of the idea, the appearance, and the technique for producing such wares. The Yaozhou kilns in Shaanxi province were among those to benefit most grandly from Yue’s celadon and black-ware innovations, and a further migration brought the dark-glazed styles into Shanxi to the northeast and the Ningxia Autonomous area to the northwest. Noteworthy in the Xixia style in general is the less than fastidious execution of designs, with some ragged edges and sketchy lines, which is inarguably a part of the eccentricity, power, and charm of these wares. 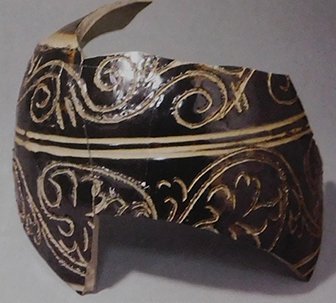 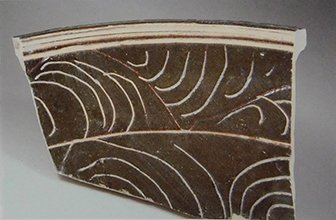 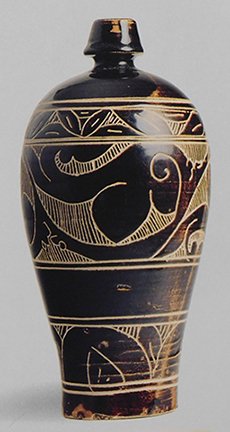