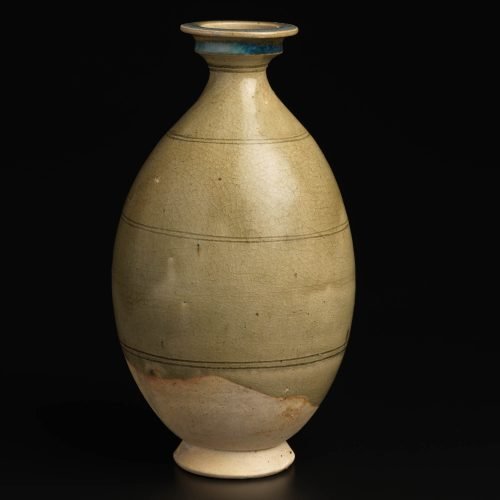 Of perfectly potted egg shape, the graceful rounded body rises from a slanted foot with beveled edge, narrowing at the neck, and with a sharp horizontal rib below the flat rim. The body is a dense, very light-greyish white stoneware and the bottle very simply decorated by the potter with pairs of horizontal lines encircling the vessel, incised while the vessel was slowly turning on the wheel. The piece is covered with a bright, glassy, transparent, pale greenish-glaze that is finely crackled throughout and gives emphasis to the horizontal lines where the glaze has gathered into the narrow incisions. Due to a transmutation during firing, a further decorative effect was produced by a shift in glaze color, a very intense robin’s-egg blue having developed on the lip and the rib below.

Among the journeys that transformed the landscape of Chinese ceramic tradition was one taken by an entourage of techniques and ideas from its stronghold in northern Zhejiang province northward. This was the movement of the Yue tradition from south to north, resulting in the production of what can be called “Northern Celadon.” This term has for many decades been used in the west to refer to the products of the Song period and later at production centers in Honan and Shaanxi, distinguishing them from the southern celadons of Zhejiang and neighboring provinces in the south. However the name is now used also for their precursors dating to the 6th-7th century during the rule of the Northern Qi and Sui dynasties in the north, of which the present vessel is a handsome example. The clay bodies of these early Northern Celadons are very light grey and even greyish white. The glazes are often applied thickly and sometimes, due to their high viscosity, end in large drips along the lower borders of the glaze coating. They are invariably clear, bright, glassy, and shot with fine crackles, and of colors ranging from olive to bluer greens. A highlight of the present ceramic vessel is the glacial-blue color of the rim, contrasting with the icy green glaze covering the majority of the piece. That effect, caused by the presence of phosphorous in the glaze, is observable in other contemporaneous celadons. The form of the present example of early Northern Celadon, with its egg-shaped body and very short neck, is typical of the late 5th early 6th century, the very subtle and attractive form likely based on metal or glassware.

Vessels closely related to the present include one unearthed in Qufuxian, Shandong province, now in the Shandong Provincial Museum and illustrated in Zhongguo taoci quanji, vol. 5: Sui Tang, Shanghai, 2000, pl. 25 and another in the Museum of Fine Arts, Boston, published in Oriental Ceramics, The World’s Great Collections, vol. 8 (Museum of Fine Arts, Boston), Tokyo, 1980, fig. 48.