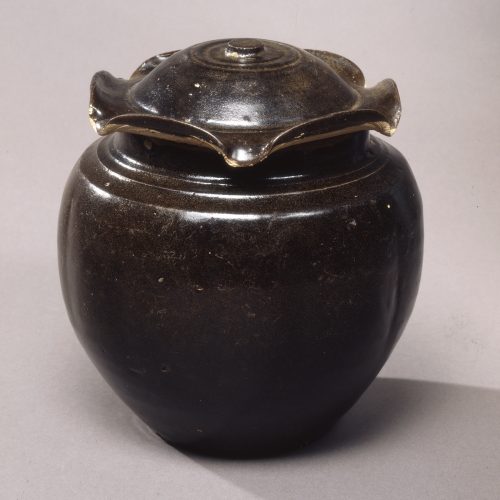 The gentle lobing of the ovoid stoneware jar was produced by subtle vertical indentations around the body below the angled, stepped shoulder. The domed cover is of lotus leaf form with a strongly furled rim and flattened round knob. The jar is covered inside and out with a satiny blackish-brown glaze that extends down to the low wide foot surrounding the slightly recessed base, which is partially glazed. The exterior of the cover is glazed while the unglazed interior of the lid reveals the buff coloured stoneware body.

The quality of the glaze and character of the body point to a northern provenance and, based on archaeological finds, it is likely that the covered jar was produced at one of the kilns in the Ningxia Autonomous Region. These kilns were active during the rule of the Western Xia kingdom of the Tangut Tibetans from the early 11th to the early 13th century and black-glazed wares related to this jar, including a lid strikingly similar to the present, have been published from a group of kilns located in this region discovered in the town of Ciyaobu in Lingwu city.[1]

Related lobed and foliate forms were produced at kilns in northern and northwestern China such as those in Henan, Hebei, Shanxi, and Shaanxi provinces. The Yaozhou kilns of Shaanxi might well have been a step ahead of their compatriots as vessels with lobed bodies and rims were already among their standard products by the tenth century. Although an extraordinary crispness of definition was prompted by the raw materials and techniques of the Yaozhou potters, other kilns in the north followed suit. Further afield in Shanxi province, where the Tangut and Chinese craftsmen together plied their trade, more than acceptable results were achieved in producing lobed and foliate forms even with the use of the less refined local materials available.

The territory occupied and ruled by the Xixia extended westward from within the bend of the Yellow River and included portions of present-day Shanxi, Inner Mongolia, Ningxia, and Gansu provinces. In the trade that flourished between the Xixia and their close neighbors to the East—the Northern Song and later the Jin–ceramics were an important commodity. The Yaozhou wares found in Xixia tombs were obviously admired and could have exerted the kind of influence necessary for such products as the present covered jar to come into being.