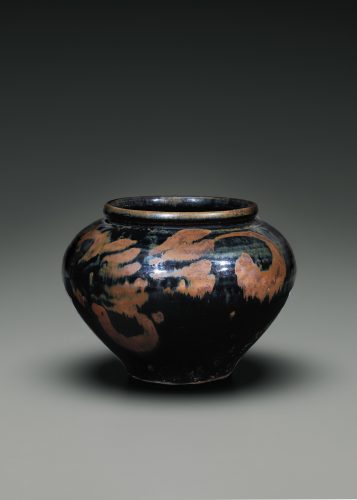 The jar is well-potted, the walls rising from the countersunk base to high rounded shoulders, the thicken mouth rim circling the wide mouth opening. Glaze was applied in two coats and produced a complex color appearing black with lighter shadows of greenish brown and draining to brown on the thick rim. Two highly abstract birds are painted in russet on opposite sides of the vessel, their thick tails dramatically curling as they sweep over the lustrous glaze. The rust color bleeds into the black lending a hazy, mysterious quality to the images. The glaze is matte on the interior of the jar, with a medallion of unglazed body at the bottom revealing the nature of the rather coarse grey stoneware body.

The magic of the brush provided an elegant solution transforming a sea of black to a firmament where russet birds appear on the one hand to be emerging from the deep, on the other to be disappearing into it. Similar designs are sometimes interpreted as botanical renderings, the identification of the subjects apparently in the eyes of the beholders.[1] However the motifs are interpreted, the sheer energy of the brush and seductiveness of the dark colors are captivating and all consuming.

The design on this vessel was one of many created by the decorators of “Northern Black- glazed” wares, variously known as “Northern Dark-glazed Ware,” “Northern Temmoku” as well as “Henan Temmoku” and even “Henan Brown Ware.” These northern wares were produced at numerous kilns across several provinces, in Shanxi and Shandong, as well as in the heartland of Cizhou ware in southern Hebei and northern Henan provinces. The present jar is likely a product of Henan or Hebei where the most refined of these wares were produced.

1, Two similar jars, for example, in the Yeung Wing Tak collection are each described as “Jar with iron floral sprays on a black glaze” (Black Porcelain from the Mr. & Mrs. Yeung Wing Tak Collection, Guangzhou, 1997, nos. 50 and 51) whereas a similar design on a jar in the Victoria and Albert Museum is identified as birds (Basil Gray, Sung Ceramics, London, 1984, pl. 96, p. 121).