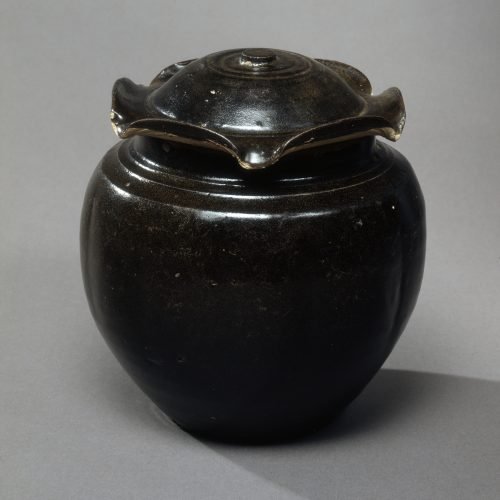 The ovoid jar is gently lobed with subtle vertical indentations below the stepped shoulder and coated inside and out with a satiny blackish-brown glaze that extends to the base above the unglazed wide foot where the buff-colored stoneware body is visible. The domed lid of lotus leaf form, with furled rim encircling the flattened knob, is covered on the exterior with the glossy glaze.

The Xixia or Western Xia kingdom of the Tangut Tibetans ruled over what is currently the Ningxia Autonomous Region contemporaneously with the Northern Song, later Liao, and Jin dynasty during the 11th through the early 13th century. It is not surprising that technology, styles, and fashions from the strongholds of ceramic production current during the Northern Song and Jin would have migrated into the Xixia region. In the trade that flourished between the Xixia and their close Chinese neighbors, ceramics were an important commodity. The Yaozhou wares of Shaanxi province found in Xixia tombs, black wares as well as celadons, are evidence not only that such wares were admired but presented potential influence over local potters.1 Similar lobed jars are known in fact to have been produced at the Yaozhou kilns and excavations at kilns in the Ningxia region, such as those at Ciyaobu, Lingwu city, have uncovered materials that suggest that production center as the likely provenance for the present covered jar.

1. It should be noted that ceramics discovered in tombs and hoards in the region ruled by the Xixia are both of local manufacture and also imported from Northern Song, Liao (907-1125), Jin, and some made after the conquest of the area by the Mongols who established their dynasty in 1207, conquering the north by 1234, and all of China by 1279. An individual example’s precise attribution to one of these ruling groups is then sometimes not possible to determine with absolute certainty.