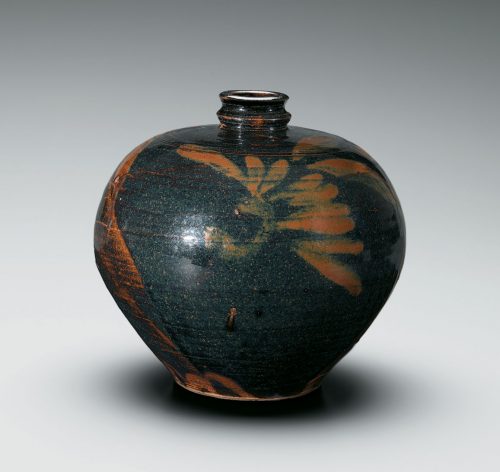 The well-potted jar is almost spherical in shape, its expansive body rounding to the small, constricted neck with double-ring mouth and resting on a countersunk base. The dark glaze was applied in two coats which produced the black to greenish-black color with lighter shadows and specks of brown throughout. The lustrous surface provides the ground for two rust-colored bird-like images, one on each side of the vessel. Painted rapidly with a brush loaded with iron-rich slip, the long tailed creatures with massive wings materialize with a minimum of brushwork. Each broad, gently curved stroke ranges from a dense rust color to much thinner tone, the transparency allowing the dark glaze beneath to show through lending depth and three-dimensionality to the images. The light grey stoneware has burned a pale buff on the exposed base.

Black-glazed wares are among the more intriguing and seductive of Chinese stonewares produced during the Song and Jin periods. The south was dominated by the dark-glazed wares of the Jian kilns in Fujian and related wares from the Jizhou kilns, known by the Japanese term temmoku. Somber, introverted, sedate, but warm to the touch, the tea (or rice) bowls, were at the core of production. The brown or treacle colors of the glaze–appearing pitch black when thickly applied— were the result of high iron concentrations in the glaze and the “hare’s fur” and “oil spot” effects due to the precipitation of iron compounds from the oversaturated glazes. The parallel development in the North occurred primarily at kilns from Henan, Hebei and Shandong to Shaanxi and Shanxi provinces. Although produced alongside the predominant slip-painted Cizhou wares, in which the black or brown designs are sharp and clear against a cream color slip, the Northern Black Wares have very little in common with them. The painted images are rusty orange to silver in color on the dark glaze and appear like watery ink on paper or watercolors with the edges of the motifs bleeding into the glaze ground, appearing blurred, indistinct, impressionistic, spontaneous and abbreviated. However, while approaching abstraction, the brushstrokes invariably coalesce and we see either large birds in flight or floral elements.

The present stylized birds-in-flight decor is present on a good number of vessels, for instance, on examples in the Ferris and Meiyintang collections (figs. 1-2). However, such glaze and décor combined with the stunning shape of the present—its body globular and both buoyant and earthbound—is rarer among published examples. A bottle formerly in the Robert Barron collection, although with a “tea dust” rather than black glaze, is beautifully rotund like the present and captures the spirit of the present bottle (fig. 3). 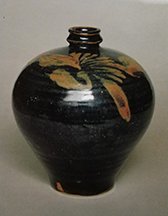 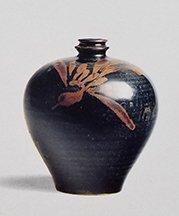 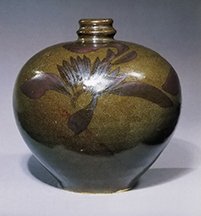