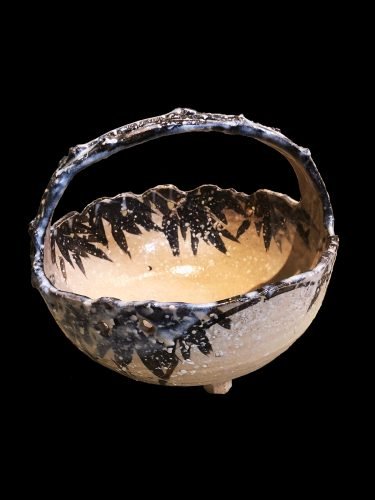 The stoneware bowl, supported on three roughly formed feet, is boldly and heavily potted with thick walls, the wide mouth emphasized by an irregularly cut rim, a number of perforations cut in a helter-skelter manner through the walls on the sides where a thick handle that arcs over the bowl like a rainbow is attached. An iron slip was painted on the bare coarse clay with a lively growth of bamboo on the exterior, partially on the interior, and on the handle. The bowl is covered with a glaze that appears clear and colorless where thinly applied and where lavishly administered the color is an opaque icy white as if snow had accumulated on the bamboo. The unglazed base bears an impressed conch-shaped seal reading “Dohachi.”

The signature ceramic tradition of Kyoto was established under the leadership of such masters as Nonomura Ninsei and Ogata Kenzan in the 17th and 18th centuries. Among their later torchbearers, Ninnami Dohachi signals his outstanding credentials in this present creation. A flawless re-enactment of his predecessor Kenzan’s techniques is this recreation of Kenzan’s handled dish with snow-covered bamboo, one of Kenzan’s most popular and reproduced works (fig. 1), and of which Dohachi produced a number of his own renditions.1 The practice of emulating the works of a master, known as utsushi, ranged from close recreations to creative copies to innovative uses of the master’s accomplishments to mere inspiration. Dohachi is able to perfectly capture the essence of Kenzan’s work while introducing a modicum of elegance and reserve and a novel use of glaze to produce the snowdrifts on the bamboo. The thick glaze actually looks icy in comparison to the white slip Kenzan used to produce snow on his bamboo. Such creative riffs on the past, while grasping the essence of his models, informs the wide-ranging oeuvre produced by Dohachi, a latter-day proponent of one of the world’s most dazzling ceramic estates.

The artist was the focus of a special exhibition at the Suntory Museum of Art in Tokyo entitled Ninnami Dohachi: An Observant and Brilliant Potter held between December 2014 and March 2015 where the present bowl was among the artist’s most representative works demonstrating his connection with Kenzan. Dohachi’s ceramics, however, also include renditions of rough Iga vases and somber Raku tea bowls (fig. 2), brilliantly colored overglaze-enameled wares based on both Chinese prototypes and on the innovative Kyoto styles of his precursors (fig. 3), and underglaze-blue decorated porcelains in a range of styles (fig. 4). His mentor, Okuda Eisen (1753–1811), was drawn to imported Chinese wares and produced exceptionable imitations of Ming overglaze-enameled and underglaze cobalt-blue decorated porcelain, an interest with which Dohachi had also became conversant. Chinese ceramic specialists, in fact, are familiar with both of these artists primarily through their versions of such wares and especially those done after China’s 17th-century kosometsuke and Shonzui wares, made at Jingdezhen for the Japanese market.

The son of a potter, who inherited the father’s ceramic business, Dohachi became a lay Buddhist monk as well and established a number of kilns in Kyoto in association with local temples. He is credited, along with a small number of fellow potters, with the revival of Kyoto ceramic production and its kaleidoscopic range of wares, which had fallen into a slump during the mid-18th century. Working with the nobility to establish kilns within their domains likely gave Dohachi access to ceramic collections with imports from China, Korea, and Southeast Asia, as well as local and traditional indigenous Japanese ceramics, any of which might have inspired emulations and creative reproductions, on which much of Dohachi’s reputation is founded.

The present impressed seal was among several ciphers used by the artist. The conch shape was derived from one of Dohachi’s alternate names, “Hora-dojin” or “Hora-san,” the hora from hora-gai, conch shell. 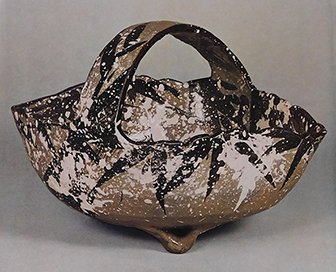 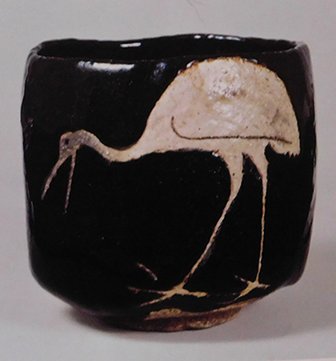 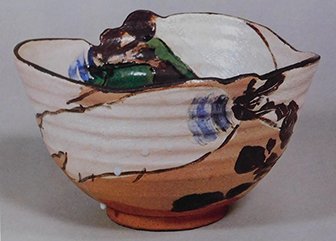 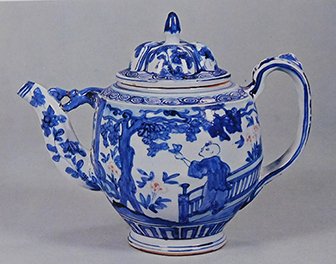