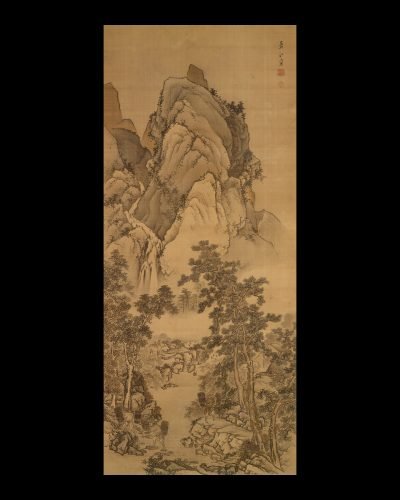 A woodcutter carries two bundles of fagots on a path leading away from a house protected by trees. His path winds around a river to a crossing occupied by two of his mates, each also carrying two bundles and supporting themselves with staffs. Above them appears a deer, indicating the rural nature of the scene, which continues upward to a waterfall depending from the sheer mountain above. Tall pines articulate the foreground, which features rocks stippled with dots and staccato strokes, and the upper surfaces are enlivened with similar dottings and strong contrasts of light and dark washes.

The style here is reminiscent of that of Lan Ying (1585-1664 or later), a major master of the late Ming-early Qing era. Lan’s paintings were favored by Obaku monks who brought numbers of them to Japan when they emigrated from China, and subsequently his style had significant impact on Japanese painters who followed the lead of continental masters.

Nakai Ranko (1766-1830), called Hakuyo, was born in Osaka and became a painter, poet, and tea master. In painting he studied with Shitomi Kangetsu, (1747-97), who had made a study of the techniques of ancient Chinese and Japanese painting and was thus a possible for Rank’s knowledge of the style of Lan Ying.