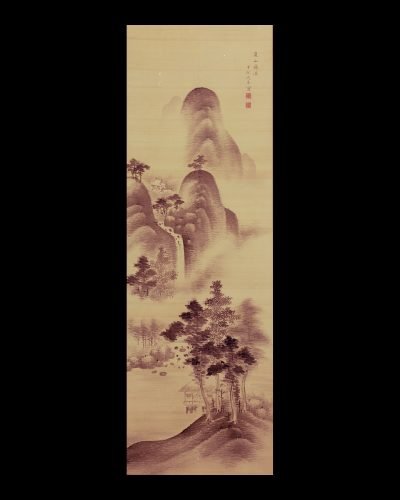 Box inscription:
by the artist dated to 1820

Within a riverside pavilion, the solitary figure of a scholar gazes out over the still water to the shimmering trees and hills beyond. A waterfall tumbles through the rounded peaks while the roofs of a mountain temple are visible above the mists. A pointillist technique, adopted from Chinese models, was personalized by Chikutō as he applied distinctively elongated strokes of ink in a horizontal alignment to build the soft rounded peaks and the trees that populate them. The painting is also replete with atmospheric mists that convey the humidity of a summer day in Kyoto.

Chikutō would have had access to the imported Chinese works at the home of a wealthy local collector, Kamiya Ten’yu, in Nagoya, who mentored him and gave him lodging. Another protégé of the collector was Yamamoto Baitsu (1783-1856). The two artists are known to have visited a local temple where a painting of bamboo by the 14th century Chinese painter Li Kan (1245-1320) inspired Chikutō’s chosen name, chiku being the Japanese word for bamboo. Similarly, Baiitsu was so moved by Wang Mien’s (1287-1366) painting of blossoming plums that he took the character for plum, bai, and used it in his name.

Chikutō and Baiitsu completed their initial studies by 1803 and traveled to Kyoto, the cultural Mecca for literati painters. Although Chikutō was not at first successful and returned to Nagoya upon the death of this father, he later returned to Kyoto and joined Baiitsu in a circle of luminaries in the artistic life of Kyoto.

Japanese scholars have identified certain phases in Chikutō’s life and art: I) 1781-1795, student; II) 1796-1801, independence; III) 1803-1823, early maturity; IV) 1824-39, full maturity; V) 1840-53, scholar-artist. The present painting was thus created during the period of full maturity, when his aesthetic goals were well established and supported by superb technique. During his latest period, when he produced fewer, more routine paintings, Chikutō devoted much time to writing his important treatises on art theory and guidebooks for painters that provided a theoretical foundation for the Nanga or literati school of paintings. Chikutō died in Kyoto and was buried at Shinnyodo in his adopted city.